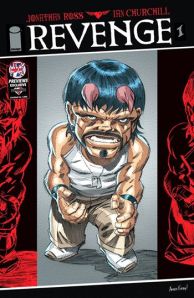 From the mind of Johnathan Ross comes one of the most violent comics I have ever read. The story follows C-list celeb Griffin Franks, someone who never made it to the top but scraped by and enjoyed a minor amount of fame. When one of his more iconic roles The Revenge is remade; he is back on top, maybe even bigger than before, everyone wants a piece of him and he is rolling in the cash and with a brand new trophy wife. From Hollywood joke to Hollywood Jock the man of the hour finally has everything he ever wanted but the problem with having everything is someone will want to take it from you and in an unusual twist they start with his face. This isn’t Face Off. This is a man who has barely scraped by having what he deserves snatched from him, well he is out for revenge and he will do anything to get it back. 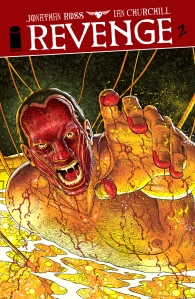 This isn’t one for the kiddies, its brutal and its graphic but its fast paced and very engaging. It doesn’t hold back, its going to hit you with everything its got and then some. With some of the best art work I have seen outside of major prints this is a brilliant read. Like I said its not for the faint hearted but there is nothing wrong with a great bit of violence especially with how it’s  portrayed here. You don’t know if you’re rooting for Griffin as he is kind of an ass but he can be a decent guy so you have to wonder does he deserve this or is this bad shit going too far?  That moral question is my biggest draw (right behind the blood and nudity) its going to be a fun read and I really cant wait to get my hands on issue two. 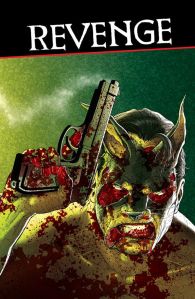 A great independent comic for anyone that’s bored of super heroes and kind of misses the 70’s style movies such as Death Wish and Death Race, this comic may speak to you.

You can check out our Interview with Revenge Comic Book Artist 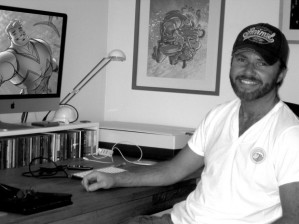 London Super Comic Con 15-16 March 2014 L.S.C.C. is the UK’s biggest and most exciting comic convention. Their show floor plays host to the latest and greatest in comics, comic related memorabilia, superheroes and graphic novels. Their panels and autograph sessions give fans a chance to interact with their favourite creators and there are a large amount of comic items on sale from numerous exhibitors as well as publishers of your favourite comic books.