Before we head to London Super Comic Con, we got to interview one of the attending 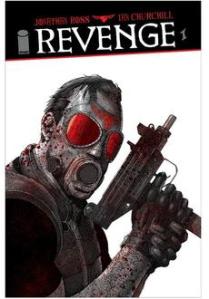 Can you tell our readers about REVENGE? What are its origins?

I’d just finished working on MARINEMAN volume 1 and Eric Stephenson at Image Comics asked me what I was going to do next and whether I’d have any interest in working with Jonathan Ross. Jonathan liked my stuff and was keen to work on something with me but at the time felt he needed to spend more time on AMERICA’S GOT POWERS with Bryan Hitch. Around that same time DC Comics offered me The Ravagers with Howard Mackie which I accepted. Fast forward to a year later when my tenure on that title came to a close, Jonathan was still up for doing something together and pitched to me what became REVENGE at the KAPOW! comic con.

What sets REVENGE apart from other Graphic Novels?

Well, for a start it’s not written as a graphic novel but as four comic book issues – let’s not forget that! That’s why we work in this industry first and foremost – because we love COMICS. Each issue is very distinct with the overall colour scheme of the covers reflecting the metabolic states of the four elements of the human body; red, yellow, green and black. That was all Jonathan’s idea, everything in the story has been incredibly well thought through in all its detail.

What has been your favourite part of the book or character to tackle?

The design of the covers including the cover images, which I also coloured. Also, generating the fake movie posters was a lot of fun!

What are the differences and similarities in drawing your own characters in contrast to another’s? For example, DC or Marvel?

DC and Marvel comics generally concentrate on superheroes for their output and it’s no secret that I LOVE superheroes, but working on a project like REVENGE challenged me on a number of levels with the obvious one being that the project isn’t a superhero one. Most stories I’ve drawn at the big two are set in fictional or stylised settings whereas REVENGE is very much grounded in real-life locations. In fact the main difference with drawing REVENGE has been that I’ve had to use far more reference material than I’ve ever had to use in the past. With MARINEMAN, the difference was that I could draw in my natural cartoony style to suit the character, which is something I perhaps couldn’t have gotten away with so freely at the big two. Also, that I could write the story I wanted to write without having to be edited.

What has been the best part about working with characters from the Marvel and DC Universe?

The thrill of working on characters that I grew up reading about and that have played such a large role in my life as a whole.

What’s your favourite part about being able to work in comics?

So many things! But if I have to name a few… Laying out an issue is the most fun from a drawing standpoint. Just getting the beats right and hitting the right points to make you want to turn the page, that’s the most fun for me. That and covers. I love writing and creating characters as I find it a real challenge – it’s like manufacturing a jigsaw puzzle without the cutting template! At the moment though, if I had to pick, I would say I enjoy colouring the most. I find it very therapeutic! I can put some music on and zone out while I do it as it’s more of an instinctual task. I also enjoy going to comic conventions to meet the people who enjoy the end result of what I do, that’s a very special experience.

What would your dream assignment in the world of comics be?

More MARINEMAN! That really was my dream come true – bringing my first ever creation to the printed comic page. The reception MARINEMAN received was astonishing and getting the Eisner award nomination was just the icing on the cake! But if you mean outside of creator owned comics then at Marvel it would be to work on Miracleman in some capacity or Captain Britain, perhaps with Alan Davis writing…!   For DC comics it would be Wonder Woman or to write and draw a Batman Black and White segment.

Anything else you’d like to mention that we haven’t covered yet?

You are one of the guests at London Super Comic Con 2014, can you tell us which exhibitors you are looking forward to visiting and which other attending Comic Artist or Writer you would love to collaborate with?

If last year’s show is anything to go by, I won’t have time to visit any exhibitors at all! It will be a case of planting myself at my pew and signing and sketching until the lights go off… The attending guests I’ll catch up with in the bar in the evening and then do the whole thing again the next day! It’s the comic book equivalent of rock’n’roll – bring it on!

London Super Comic Con 15-16 March 2014 L.S.C.C. is the UK’s biggest and most exciting comic convention. Their show floor plays host to the latest and greatest in comics, comic related memorabilia, superheroes and graphic novels. Their panels and autograph sessions give fans a chance to interact with their favourite creators and there are a large amount of comic items on sale from numerous exhibitors as well as publishers of your favourite comic books.