Grandfathered follows Jimmy Martino, long time bachelor and restaurant owner, who discovers he not only has a son but also a granddaughter.

I always knew Grandfathered would be good. I saw the promo and predicted that Fox had a winner. It’s one of those sweet and charming shows that you can’t help falling in love with. The premise is interesting, the jokes are funny and the characters are endearing.

The main character, Jimmy, is played by John Stamos who is obviously in his element in the role. Stamos does comedy so well and here is no exception. He makes Jimmy likeable and believable, whilst also allowing you to shake your head at his ridiculousness.

The scene where he mistakes another child for his granddaughter and changes her diaper is one great example of this. Stamos is also a chemistry magnet, the relationships he has with the other characters is probably one of the best things about the show. In particular him and his employee Annelise, played by Kelly Jenrette, make a great comedic duo and are a constant source of humour throughout the pilot. I only hope we see more of her in upcoming episodes as she obviously has a lot of talent. 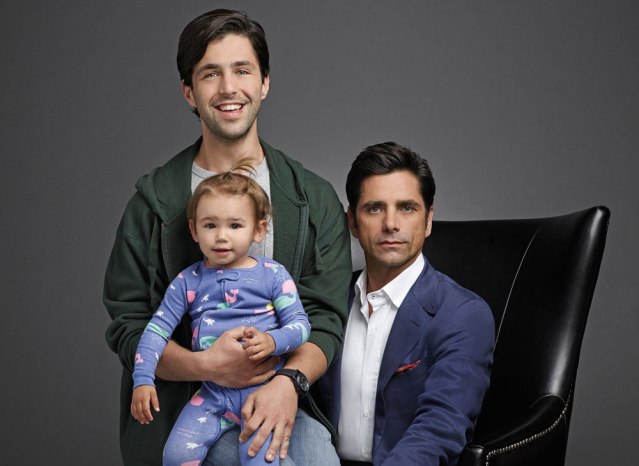 Josh Peck plays Jimmy’s son Gerald who is probably the most loveable character on the show. He’s so sweet and adorable, a total opposite to his father. Their opposing personalities will be interesting to see play out. I wonder if with time Gerald will become more like Jimmy or if Gerald’s sweetness will rub off on his father. Either way it promises to be a fun relationship to develop.

Other characters include restaurant employee Ken (played by Ravi Patel), Gerald’s mother Sara (played by Paget Brewster), Gerald’s daughter Edie (played by Layla and Emelia Golfieri) and Edie’s mother Vanessa (played by Christina Milian). All have some great moments in the pilot but baby Edie is the real scene stealer. Her kissing Jimmy was perhaps my favourite moment of the entire pilot. She’s going to be responsible for a lot of aww-worthy moments, I can tell.

Those aww-worthy moments are really what make the show shine. Yes a good comedy delivers lots of laughs but it also gives us those heart warming moments that really make us connect with the characters and the story. The scene with Jimmy running through the streets to get Edie to the hospital was magic and really made me like him even more. I’m hoping that the writers maintain the great balance that they achieved in the pilot.

Grandfathered did everything right in its debut. If it continues to deliver such high quality episodes it may be the best new comedy show of the 2015/2016 television season.