The Naked and Famous

So I just purchased tickets to see The Naked and Famous in November, this has brought me a lot of joy this week, with constant reminders on my phone to get Naked and Famous (the 2nd half of the reminder stated ‘tickets on Friday’, but due to restrictions on space the phone only shows the first half, still good advice.)

So a lot of people are probably asking, how did you find out about them, who are they, are they any good and can I see them….

So lets get started

How did I find out about them……

Well it was 28th of December 2010, how do I know that day, well its one I would do well to remember, anyway I digress, Fearne Cotton was playing them as the BBC was pushing them for the sounds of 2011, it was a good call.

The Naked and Famous are a New Zealand post-punk revival band from Auckland. They formed in 2008 when Thom Powers and Alisa Xayalith recorded EPs with engineer Aaron Short, a fellow student at Auckland’s MAINZ music college. 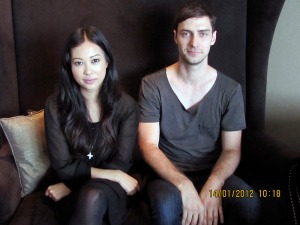 Are they any good?

Below is a selection of their music

In my humble opinion, yes they are very good, but an opinion can never be right, as its not a fact.

The last video was filmed by me, so if you don’t like it, message me and I will fight you!

Now that you know what I know you will want to see them, for tour details click here.

So to sum it up, New Zealand has given us many awesome things, very good rugby, the book the Jesus Weed, Russel F#cking Crowe, Lord of the rings and now a very good musical act that you should all go check out.

BTW this is their official site