I am a dreamer and I am so guilty of lying out in the grass wondering what if?

I am obsessed with the What If!

I am obsessed with Alternate History and Alternate versions, growing up I always loved seeing the evil doppelganger of a hero go up against their most hated foe. These where always the best scenarios, Nemesis Prime, Owlman, Bizzarro, Captain Toxic and Akuma to name a few. There is just something Shakespearean about defeating your dark mirror version, about stamping out what you could have been, I guess I always liked this because in all humans we have the potential for great good and great evil. Maybe this is why I loved Dark Nights Metal so much, the series sees earths champions be systematically defeated by a group of Evil Batmen from various alternate realities. Each of these Realities see’s something go horribly wrong in batmen’s life which leads to him crossing the line and never looking back. 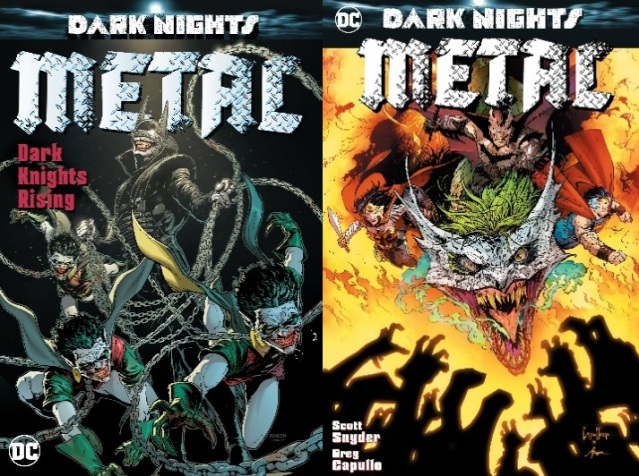 What makes this evil doppelganger story so unique is that you can almost justify the actions of each villain, after all what makes Batman so great is that is a human taken to the peek levels of mental and physical abilities, but what happens if we cross those lines, what happens if his mind isn’t strong enough, or what happens if his emotional overwhelm him, after all he is but a man among gods. So what happens when the best of us becomes the worst of us?

The evil Batmen are comprised of –

I should point out, not all of these characters see themselves as a villain and some feel great remorse for what they have done and that is what makes these characters great, they may be evil but sometimes we do awful things for what we love. For instance the Devastator only became a monster when he was left with no other choice, while one might argue that The Batman Who Laughs is the victim not the villain of his story, evil actions do not belong solely with evil men, sometimes the best of us commit the worst crimes too.

Being DC the art is as usual beautiful and vivid if anything this is a perfect reason to pick up the series. Another great reason to pick this up is the mix of old and new, from kicking the series off with The Challengers of The Unknown and later having the newer Green Lanterns appear this series has the perfect mix of old favorites and new heroes.

The series is as enticing as it is dark, once you start you will not be able to pull your eyes away from the pages. Of course something I really loved about this story is its deeper meaning, no matter what our transgressions are and no matter how broken we can be, as long as we keep a core group of loved ones around us, we can persevere and be better for it. Yes that is a bit cheesy but its true, now how this applies to the overall arch, well I wont be telling you that, you are just going to have to pick up the good and give it a read.

If you are interested in this series then you are in luck as now all the issues have been collected into one glorious book and believe me you will burn through it once you have started.