Games Workshop is on Audible !

I have vague memories of my first visit to the Games Workshop, it was a dreary Thursday evening, my mother and sister where clothes shopping  leaving me and pops with nothing to do, we went looking around shops just to kill time and then he took me there, it was beside the rear entrance of what is now a Westfield Shopping center and to this day it is still one of the great nerd havens in the city. If you have never heard of Games Workshop, they specialize in tabletop war games of the fantasy and futuristic variety. Though it has been many years since I played the tabletop games, I am still an avid player of their video games and a reader of their novels. I have dozens of books from the Warhammer 40k universe, most from its prequel series, the Horus Hersey and they are wonderful. Considering that the series is at nearly 50 books you should understand it is very popular. I know reading that many books may be daunting and I should remind you that those books are just the prequel series, they also have the main timeline  the Warhammer fantasy novels too, so I have been pleased to discover that currently audible has almost 100 games workshop titles in its library and Below I will give your a couple of my suggestions, that will hopefully inspire you to go forth and enjoy. 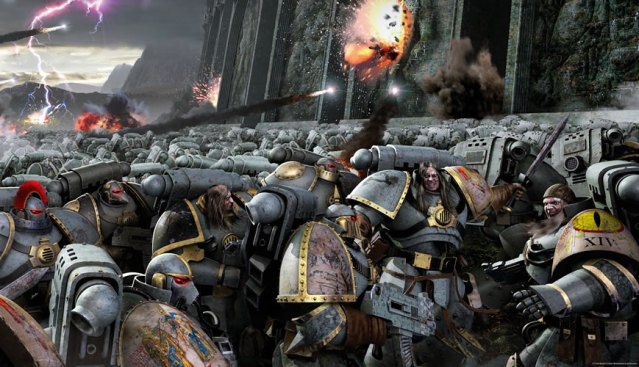 Starting off with a trilogy is kind of cheating but its my article so I can do what ever the fuck I want. Its a perfect starting point for anyone especially since these three novels set up over 10,00 years of plot over a short space of time. At the beginning of the books mankind has been on a quest to dominate the universe, one we are completing with unparalleled speed. The Immortal Emperor is on earth consolidating his gains, while his son Horus continues to win battle after battle. Horus is a proud man, bordering on the status of a Demi-God and he is about to fall from grace and make pacts with multidimensional beings that will turn him and all his follows down a dark dreadful path. 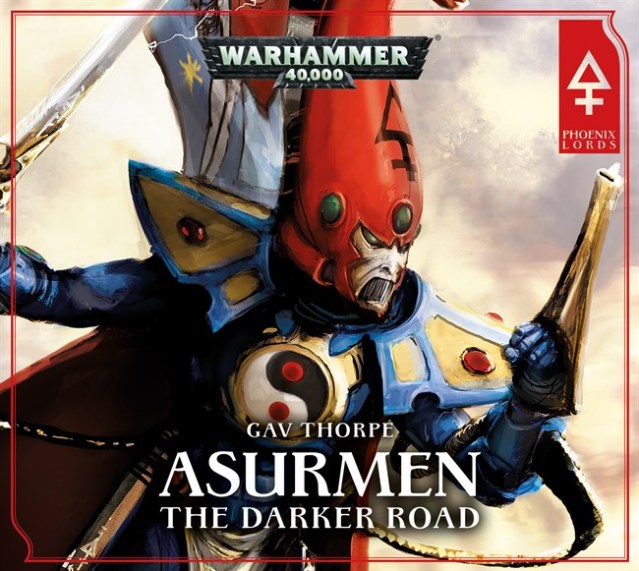 Unlike the previous entry this is not set in the prequel time line, this is pure 40k at its finest. In stead of humanities elite energetically enhanced warriors of the previous entry this book follows the Elder, who are actually Space Elves, Asurmen is one of their greatest warriors and he is the original Phoenix Lord, this book watches as he is summoned to help guide his people through some possible dark choices.

I am a little hesitant to put this on the list because It is not the best from its series, but it is a great series none the less. Salvation’s Reach is the latest book from the Gaunts Ghost series, the books follow a legion of Soldier called the Tanith First-and-Only. They are the only survivors from the world of Tanith, sometimes called Gaunt’s Ghosts after their leader Commissar Ibram Gaunt. Think Sharpe in space, but more hardcore. Unlike many Warhammer books Salvation’s Reach follows a group of ordinary men armed with a rifle and their courage, set to face off against some of the universes most terrible evil’s.

4. Battle for the Abyss: The Horus Heresy, Book 8

Set just at the beginning of the Horus Hersey, this book see’s a rag tag group of super soldiers, who months later would find them selves possibly on opposing sides of the war, team up to defeat their treacherous brothers in arms. I just loved this book because it is just so tense, you see an out numbered, out maneuvered and out gunned force with very different beliefs go up against a cohesive fighting force pushed by a dark religion to wipe out their hated enemy.

This is one of my all time favorite science fiction novels and for the most part is pretty standalone, compared with other parts of the Horus Hersey. A group of powerful individuals decide that it is in the Empires Best interest if Horus, their Emperor’s treacherous son, is killed swiftly. They end up sending an elite team of assassins after the universes most deadly man. This team is made up of a sniper, a master of poisons, a master of disguise, an intelligence officer, an expert in hunting and killing psychics and an Eversor, if the other assassins where as subtle as a knife in the dark, the eversor is a chainsaw in a town square at noon on a Saturday, they are a master of murder. This group of expert killers are in for the fight of their lives and will stop at nothing till the Emperors justice is served. What I loved about this book is before you start you know they fail, because the series is on its way to book 50 its obvious that the villain is not dead by 13, that and anyone familiar with the lore knows how and when Horus will die. What makes this great is that knowing the outcome going in, we are still compelled to read every page, through great character development and some very intense moments.

These are not the be all and end all of Games Workshop story telling, but they are some of my favorites and I hope you all enjoy.