After spending a weekend offline I woke up to discover the news that one of the greatest artists of the 21st century, if not ever has left this world. Not long after his 69th birthday David Bowie passed away on Sunday 10th January. However his time here was not wasted, he was someone who helped change this world through his music, his art and his will. I have been a faithful fan of David Bowie ever since I first heard Under Pressure, at the time and still to this day I was massively into Queen but once I heard that song I had to head straight to the attic and grab my parents copy of Ziggy Stardust. Who knew the guy from the film Labyrinth was a singer? Bowie was a force to be reckoned with, whether it be his young days sticking up for the rights of men with long hair, which was an issue at one point, to the way he changed the art scene.

Musically he was someone who was ever-changing, whether it be as the glam rock god of the 70’S to the synth styles of the 80’S then onto the 90’s and beyond. He pushed the boundaries and did what ever made him happy as an artist. He was always looking for new ways to write his songs, even turning to using a computer to randomly generate words that he could turn into his lyrics. He was never afraid to seek out new inspirations for his music and to try new instruments, he was music incarnate and that made him great.

He was not only known for his music but also for his acting skills, whether it be as the Goblin King in Labyrinth, an alien in The Man Who Fell To Earth or using his mime skills in Merry Christmas Mr Lawrence, his great cameo in Zoolander, the ever creepy boy in The Image or my personal favorite Nicolas Tesla in The Prestige, a role that Christopher Nolan said he was perfect for and that is something anyone who has watched that film has to agree with. Not content with just film Bowie even went on stage in the Elephant Man, some performers are called triple threats for their ability to act, sing and dance, if that’s the mark of the triple threat then god only knows what David Bowie was.

A few years ago I was lucky to get a chance to visit the David Bowie Exhibition in London and it blew my mind. I and so many others got to see inside the mind of a genius, we saw his costumes, stock footage from his performances, some of his instruments, the fashion he designed (including this very awesome coat below), we saw some of his early SNL performance which is just weird, a look into his days in Berlin and all his movies but for me the absolute highlight would have been sitting in the final main room where you were surrounded by his costumes and these massive walls that some of his performances where projected on. I sat there for as long as I possible could, it was kind of awe inspiring and from the looks on the faces of those around me I was not the only person who felt blown away, yet strangely at peace with the whole room.

So many people were influenced by David Bowie, maybe it was Nirvana doing their amazing cover of the man who sold the world, to people like Lady Gaga with her outrageous fashion choices but in the end Bowie did it first and Bowie did it best. 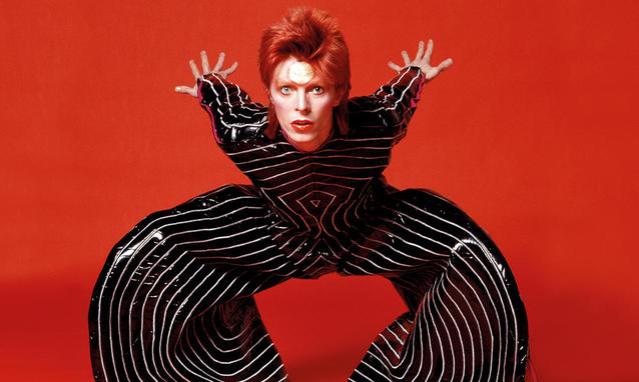 One last toast to Ziggy Stardust, a bow to the Goblin King, a Salute to the thin white duke and a good-bye to someone who has been there through most of our lives. The thing about great music is it follows us through the years, in our good times and our bad times, it defines generations and people, Bowie may have been a mime, actor, fashion designer and artist but he will always be a musician first and was someone who shaped the minds of the young and old. I suppose in that way he will always be immortal and like I said earlier no one can debate that he was and still is one of the greatest artists to ever have graced the stage.