The Legend of Drizzt: The Collected Stories

With Dungeons and Dragons latest edition out, there may be some new players coming into the fold and, I feel this this particular collection of stories may help give you an understanding of the D and D world. Dungeons and Dragons is one of; if not the best known fantasy game out there, weather you play with the figures or go for the more modest pen and paper, it has a wide appeal and anyone who has played it knows that the series has a deep rich back story that could rival Tolkien’s Middle Earth and GRRM’s Westeros. A great deal of this back story comes from R.A.Salvatore, don’t get me wrong there are others, but Salvatore did give us Drizzt Do’Urden one of the best protagonists in fantasy fiction, if not fiction in general. This guy is the outcast to end all outcasts. A ranger that could put Aragorn to shame, more honour than Ned Stark and the Elf that makes all others look like complete wimps.

Drizzt is a Drow, a Dark Elf. This species is ruled by an evil Matriarchal class, who follow the will of their evil Goddess Lolith. Hailing from the subertarean city of Menzoberranzan, which isn’t a place directly from our nightmares; Drizzt defied all the odds and became a hero. To set everything in context I feel like I need to explain some details.

In the world of D and D all Elves once lived together in harmony until a civil war broke out caused by the Goddess who would one day be called Lolith, her and her followers where cast out, but not defeated, Lolth guided her most loyal Drow servants to the Underdark, a terrible place beyond the light of the sun, pretty much miles and miles of underground caves so big they can hold entire cities, here the Drow lived and plotted their evil revenge.

Now the Drow see themselves as the victims here, to them they are a persecuted minority, which is interesting as they kind of are, it’s just that they are pure evil. Drizzt on the other hand is kind of like their peoples equivalent of a serial killer, it’s just instead of being are evil, he is very innocent and pure, also the single greatest warrior in his generation. He has his own series of books which I will talk about another day, but this collection of short stories is a great jumping off point.

The stories don’t just involve Drizzt they also involve many of the characters from this universe, whether it be his mystical panther companion Guenhwyvar, his enemies (who for being evil are a surprisingly good comedy duo) Jarlaxle and Entreri’s and many of the heroes of the D and D universe. This may not be the best reason to get this audio book but what drew me to it was the all-star cast consisting of: Felicia Day, Dan Harmon, Greg Grunberg, Tom Felton, Danny Pudi, Sean Astin, Melissa Rauch, Ice-T, Will Wheaton, Al Yankovic, Michael Chiklis, and David Duchovny!

The stories are also very deep with themes such as morality, racism; politics, war and slavery all are touched upon. This is a truly unique audio book and it’s great for first time listeners and season veterans alike, for details on where to buy it click here.  (Alternatively you can always purchase the stories individually).

The stories are all wonderful but below are my favourite two.

This story follows two of the antagonists from the series and it reads more like Ocean’s 11 than a fantasy story. Here are two main characters are tasked with robbing a beautiful women, of course everything isn’t as it seems and they both find themselves in a hot mess. 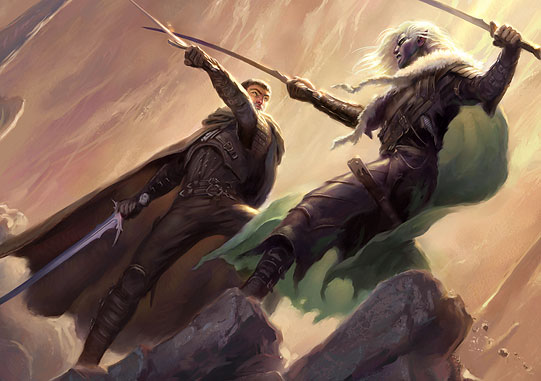 If you’re someone who has thought of D and D as this thing for uber nerds that hide away from the world, well you will find out very quickly they were busy building their own worlds and living in them and hey any world where you can summon an awesome panther companion or having a living sword and be hired to fight for an immortal dragon is a world I want to live in.

The Legend of Drizzt: The Collected Stories (Unabridged) is available on Amazon.