An interview with Sean Astin Part 1

Sean Astin launched his Vox Populi Kickstarter project last month, which has now successfully reached its pledge goal. However you can still pledge and back this project and help achieve the stretch goals. Part 2 of this interview is now available here. 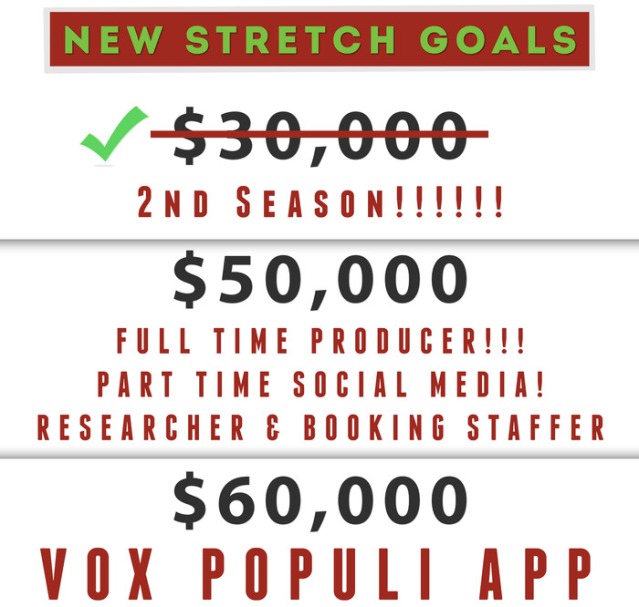 Actors love to talk. Just have dinner with one of us sometime. My Mother was President of the Screen Actors Guild & had her own morning talk show in Los Angeles. I think that somehow, before my brain was fully formed, the idea for me doing a political show was born.

2.      Besides your background in acting, what else makes you different as a talk radio host? What’s different about your show from what else is on the radio or online?

My acting career is pretty well known, but much of the rest of my bio is not. I would encourage you to read through it. You might be surprised. I graduated from UCLA with Honors holding 2 degrees, History and Literature. I’ve done a lot of philanthropic and other charity and volunteer work. I managed a legitimate Congressional Campaign. But, probably the most interesting thing for people to learn is that I served as a Civilian Aide to the Secretary of the Army for 10 years and I was on President Bush’s Council on Service & Civic Participation. It is from these to positions that I think I developed a confidence about myself. Interestingly though, I don’t think that I have nearly the base level of knowledge that I would expect from a great host. But, I do have an approach that is fresh if not totally unique. I approach the conversations from a position of genuine curiosity. I know that I don’t know very much when it comes to most of the topics we address. I certainly have instincts and opinions, but I think there is value in wading in to these topics in an effort to achieve greater understanding, even if we don’t agree with what we hear! My own sense of fairness and ability to listen comfortably to people who say things I don’t like is a recipe for compelling and useful dialogue.

3.  What role does social media play in Vox Populi’s daily operations? How valuable are they to what you do on the radio?

Social media, Twitter specifically is what drives the audience. The fact that I had 30k followers was inspiring enough to me, that I figured out how to put on this show, virtually on my own. Johnny Ice our engineer at Toad Hop is amazing & my brother has leant a hand on a few episodes. But, the only publicity for the show has been me personally tweeting out what the topics are and giving updates about when it’s on. During this KickStarter Campaign I’ve investigated and am now using Facebook with greater effectiveness. One of the upgrades the show will get, is the use of a dedicated social media “staffer”… I’m more than eager to interact with the audience. Managing the logistics of the effort is more than a one person job!

4.      Do you see social media and the Internet as ultimately a beneficial or detrimental thing in world politics?

Social media and internet are a reality. Like many inventions, it can be a force for good or ill. Ultimately, as the government polices violent threats, the rest of us are free to express ourselves as positively or negatively as we choose, such is our constitutionally guaranteed right. Ultimately, the seedy underbelly of the social media space, trolls and vicious detractors will wreck havoc, but in the end, I believe that the so called Marketplace of Ideas is given it’s greatest opportunity to help civilization when many if not most people participate. Social media makes that possible. So, my answer is, Better, definitely better :-)))

Thank you Jenny from Nerdgeist. Our interview perfectly captures what http://t.co/MG9bYbk9u7 is all about!!! http://t.co/NhBu6ZVkqu