Simon Stephens’ award winning Punk Rock has arrived at the Lyric Theatre.  Directed by Selina Cartmell and starring an all-new young cast, were the seemingly privileged clan of youths whose lives, under the pressures of school and their own private battles spiral out of control is brought shockingly to life.

Rhys Dunlop as William a scene from Punk Rock at the Lyric Theatre until 6 September.
Lyrictheatre.co.uk

Beginning in the common room of a Stockport grammar school; awkward William (Rhys Dunlop) strikes up his own style of unwittingly interrogative conversation with the new girl; the more shrewd Lily (Lauren Coe).

Lauren Coe as Lilly in a scene from Punk Rock at the Lyric Theatre until 6 September.
Lyrictheatre.co.uk

Ian Toner as Bennett in a scene from Punk Rock at the Lyric Theatre until 6 September.
Lyrictheatre.co.uk

Together, in the adult free realm of the college the students play out their own mini hierarchy keen to assert their identities amidst exam stress, unrequited love, backstabbing and other common classroom anxieties. There is humour and discomfort in equal measure as the fluid choreography, excellent cast; well-paced direction and imposing set recreate the everyday classroom environment whilst carefully building an unsettling tension that reaches a horrific conclusion.

Aisha Fabienne Ross as Cissy in a scene from Punk Rock at the Lyric Theatre until 6
September. Lyrictheatre.co.uk

There is a niggling feeling that the violent changes and actions from certain characters in later scenes are a little unbelievable in that there is perhaps not enough build up or background to justify them entirely.  However, overall, this feeling is a minor one as the visual pacing and the actors’ performances make up for this and allow some space for imagination for that which is not explained. 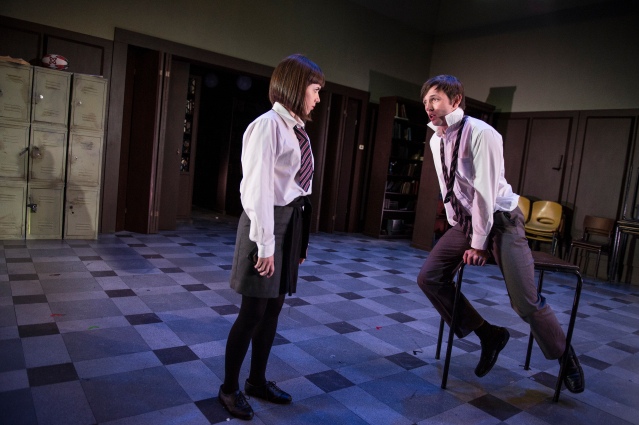 Lauren Coe and Rhys Dunlop in a scene from Punk Rock at the Lyric Theatre until 6
September. Lyrictheatre.co.uk

Scenes in the first half focus on the everyday and visually are more energetic and flow quickly between each other, only scratching the surface of the impending tragedy.  Lily confides in William that she self-harms, Cissy pays little regard to her friendship with Tanya, blurting her secrets to the rest of the group and Chadwick quietly endures abuse from Bennett.  The second half drives away from this familiar world into a darker place, as movement slows and scenes grow in length and intensity as the fear of failure becomes a reality, taunts become violence and previously unheard voices become fearfully louder. 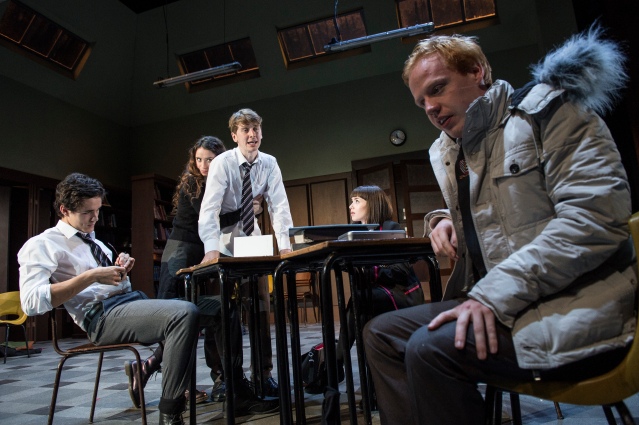 Certainly the play has the energy of adolescence and punk that you’d expect one of its strengths being the well-choreographed movement of each scene, from the awkward restlessness of the group settling back in with a new classmate to the more fluid banter and frightening aggression as familiarity eases in.  Set changes were instead musical interventions, in which the cast would, effectively, dance the set to the next scene, powered by a soundtrack of rock anthems old and new.  This was both an emotionally and physically demanding performance for the cast, which makes the fact that they are all new-comers to professional stage all the more impressive.  There were strong performances throughout that provided needed authenticity to the characters that verged on classroom stereotypes.

Jonah Hauer-King, Rhys Dunlop and Lauren Coe in a scene from Punk Rock at the
Lyric Theatre until 6 September. Lyrictheatre.co.uk

With the exception of the final scene, Punk Rock takes place entirely in the 6th form common room, with its high ceiling, tiny windows and old bookcases it successfully resembled the kind of dingy Hogwartian decay of a school floor reserved for young adults.  The scenery was completed by effective ambient sounds of trains passing by and heavy rain.  Alongside the other elements of the performance, having each scene take place in one room also helped the eventual sense of claustrophobia, especially in the later more uncomfortable scenes.  Lighting and sound were simple, used sparingly and effectively in alienating the viewer from the rest of the audience at key moments.

Rhys Dunlop and Lauren Coe in a scene from Punk Rock at the Lyric Theatre until 6
September. Lyrictheatre.co.uk

Punk Rock is an intense experience; it’s raw, energetic but also greatly unsettling.  Visually, everything works well to create the pressures of the everyday and later the sinister.  It’s an engaging reflection on the affects of pressure, fear and anxiety on such a fragile, crucial period in life.  Dragging the audience through an adolescent roller coaster of emotions, it’s a fine watch but not necessarily a comfortable one, but that is why it is a success.  Punk Rock is on until the 6th of September, I think it will appeal to people of all ages who have fond and not so fond memories of teenage angst but it’s particularly worth a look to see some great upcoming performers in their debut roles.

The newest trailer for Age of Empires IV just dropped and all the old memories just came flooding back to me.
Feeling blue that it's Sunday night...
Finally getting round to watching Palm Springs.