Death is only temporary when your love is eternal…

Truer words are rarely spoken. But to bring all of you up to speed. Critical Role is a web series where a group of a group of extremely talented voice actors play Dungeons and Dragons and two years after the end of the initial campaign the team keep treating us to more glorious content. One such piece of content is happening this weekend – a wedding between Percy and Vex. Fans found out about this when they received wedding invitations to the event – to get one such invitation you needed to be a backer for the Critical Role Animated Series Kickstarter.

But wait there’s more. To further cement and celebrate this union the Critical Role store is offering you the fans the chance to purchase replicas of the characters wedding rings. Just head to their store here.

Judging by the mountains of fan art, plenty of critters have been wanting this. 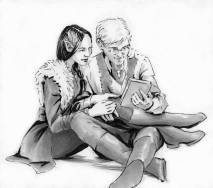 So congratulations to the happy fictional couple and may their enemies run in dread.

Netflix just dropped a trailer for season two of Alice in Bordeland and I officially cannot wait for the next season to begin.
The Princess Bride is 35years old today. Are you a fan of this classic?
Had such fun yesterday at @blackaxethrowingcobelfast and turns out I'm not half at throwing an axe, which is a pretty fun fact. Will definitely be going back again.
My Tweets