With the announcement of the new Power Rangers film this comic couldn’t be coming out at a better time. Picking up from where we left last time, Tommy is in a bad state and his new friends have rallied around him to help him out of his funk, only this is not a funk this is actually PTSD. Tommy is on what is referred to as condition yellow, which is a hyper aware sense of what is happening around you. This leaves you in a constant state of defense and counter attack which in the end will leave you exhausted but alive. Let’s face it you can’t really blame the guy either he was brainwashed by an evil witch to do some pretty shitty things and his new group of allies are not so sure where they stand with him either, which again is another nice touch. Instead of just having him trusting them, Tommy has to earn his place as a hero. It’s not as positive as the original series but it’s a lot more grounded.

Again this series delves further into the Power Rangers universe by showing the more mundane and normal things that the kids get up too while at the same time showing you new rooms within their HQ, for instance their medical facilities.

Not only that but we do see more of the villains lair, after all it was a moon castle in the series and we hardly saw any of it, so this time we are getting to see a lot more of its dark and evil features.

Though my biggest highlight is the fact that we see the Sabertooth tiger in action. In the original series the rangers just formed up their Megazord and went at it with the bad guys, it in fact made the smaller Zords redundant, though I guess the reason for this was timing and it would be harder to pull off, but these are not issues in a comic book series which makes this an awesome little scene. 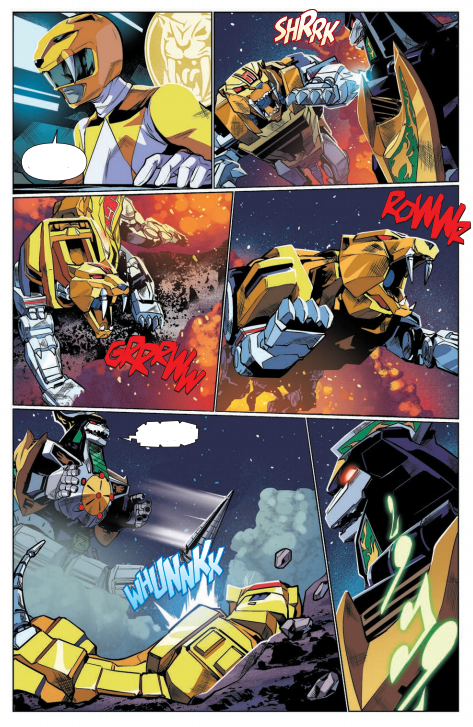 The new Power Rangers series continues to really impress me and I cannot wait to see where they plan to go with this.