Interview with BillyGoat Entertainment about their Game HM Spiffing

A few weeks back we posted an article about the new adventure game HM Spiffing well it’s near the end of the line and we managed to snag an interview with William from BillyGoat Entertainment, so if you still haven’t invested yet then sit down, read and go check out their Kickstarter!

Since this is a point and click adventure game I have to ask, what other point and click games did you enjoy in the past?
My favourite adventure game of all time is probably Sam and Max Hit the Road. The game basically took a decade’s worth of Steve Purcell’s best ideas form the comic books and crammed it into a beautiful, off the wall adventure game. I loved the characters as a kid and was a big fan of the short lived TV show as well, still holds up super well today. Then of course there is Grim Fandango, Sam and Max was bonkers but Grim Fandango was epic. Really looking forward to the re-mastered version, the early 3D graphics haven’t aged with as much dignity as the better looking 2D adventures of the mid 90s but story and puzzle wise it is faultless.

Care to sum up the game for our readers out there?

Politically incorrect, unacceptable in 2014. Seriously though we’re developing a 3D graphic adventure game with a story intentionally rather daft. The Queen of England has decided she wants to expand the British Empire once more. However, seeing as colonialism isn’t something that tends to get positive press these days, Her Majesty instead turns to the stars in a bid to establish a Galactic British Empire. Of course other nations have similar aspirations.

In our game you play the role of Captain Frank Lee English, as you travel through the cosmos on your misadventures solving puzzles, engaging in witty banter and being subject to insults from the French. We riff off a lot of old (and contemporary) Anglophile beliefs, however everyone is in on the joke, it’s all just a little bit silly.

What’s been your biggest influence in the game?

You mean who do we plagiarize the most, right? Well, we very much want to channel the spirit of those mid 90s Lucas Arts point and click adventure games with our puzzles and dialogue. Games like Sam and Max, Day of the Tentacle and the Monkey Island games are big influences. The surreal humour of Monty Python is another big influence, particularly the sketches from their Flying Circus TV show.

The ship is so British where did you get the idea to design it?

Ha, well the HMSS (Her Majesty’s Space Ship) Imperialise II, to give it its full title, was intentionally meant to be a collection of some very impressive feats of British engineering, crammed together in the same manner of the car that Homer Simpson designed, ie it had to look a bit rubbish! The joke is that the tech on the British ship is always a bit out of date and probably cost five times what the government should have paid for it (thanks to overly complicated and easily exploited public procurement requirements). Which is why things intentionally look a bit ugly. The actual design is a mix between a classic Mini-Cooper, a Harrier Jump Jet, Thunderbird 2, a Spitfire and the American Space Shuttle. All those things individually are elegant, beautiful looking machines, together not so much! It was tough to get right, we wanted to design something intentionally ugly, that was funny but aesthetically pleasing at the same time. It’s a bit of an oxymoron. 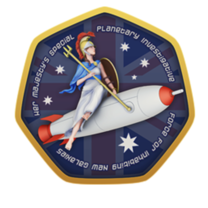 What has been your favourite part about creating this world?

Personally I love Captain English, I could not be happier with how he looks, I’m a big fan of his personality which is largely down to the actor, a gentleman called Bill McCrum, that voices him. I’ve known Bill for a long time now and bombastic enthusiasm he brings to English makes him charming and very easy to listen to. He really brings adds to the script with his delivery of English’s lines, I can’t imagine him being voiced by anyone else.

You have alluded to further developments in the games series, care to enlighten us on what the future holds for the Her Majesty’s SPIFFING?

From the beginning we imagined the story of Captain English being split into three distinctive parts. We do consider them to each part to be individual games/ stories in their own right.

When talking about the story I’ve been the original Star Wars trilogy as an example of what we’re planning, how a New Hope (good first entry) leads into The Empire Strikes Back (the highlight of the saga) followed by the Return of the Jedi (has its moments, not as good as the first two).

Our hope is that our three games will follow that trajectory, good, great, passable! 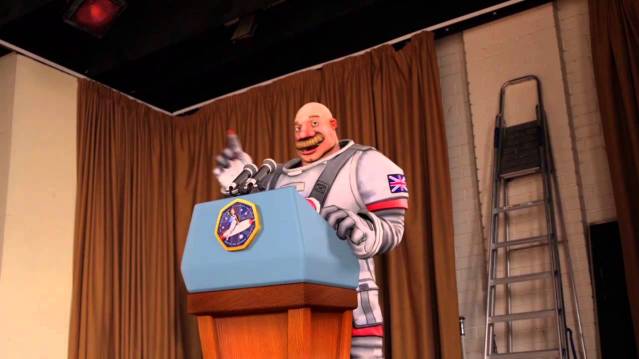 For anyone else out there not sure about pledging or not, what rewards do you have on offer to temp someone into fund this project?

Beyond waiting 8 months for the game and getting your name in the credits we have some cool digital rewards to have your likeness featured in the game, whether that be as a fully animated 3D NPC or a literal piece of artwork part of the environment. We have a range of physical rewards that are exclusive to our campaign as well that includes t-shirts, metallic emblems of the HM SPIFFING crest and 3D prints of characters from the game.

Anything else you want to say to our readers?

I fear you’ll need to watch our pitch to get that particular in-joke! Feel free to do that now!

If you’re looking for something unique and fun this is the game for you. To try this game click here for the demo. To find out more information and to make a pledge, visit their Kickstarter here.