So you want to play magic the gathering? Part 2, Green

Since this is a series of articles that is designed for players who are new to the game, or Green behind the ears if you will, see what i did there I made a joke, I am going to teach you about Magic’s five colours. Each colour has a play style and an ethos that drives it. No colour is good or evil, though some may lean that way more than others. Green searches for a sweet spot, sitting somewhere between hippy chick that just wants to love everyone and an angry bear defending its cubs from an attacker. Green is all about nature, it seeks to coexist with the world around it and not to change it, this is what sets green aside from its fellow colours.

Green has 2 nature based principles that flow through its cards, community, the pack, the tribe or the heard and survival of the fittest, these may seem like conflicting theories but they are seen in nature all the time and nature is full of conflict. In green you don’t use dirty tricks or under handed tactics you use brute force and strength. Green does not look for ways over or around the wall, green goes through the wall. Green is at home in nature, it hates the artificial  this is something that you will see time and time again in its cards.

Thoughts on other colors

In white green see’s someone who wants to work as a community, the good of the whole over the good of the self. Sadly white gets too bogged down in its own laws and rules, for Green law of the jungle is all that matters, you can’t own property and the world is bigger than the community.

Green and Blue are very far apart, but green can appreciate the fact that blue wishes to improve upon its self, this is an admirable trait that they both share, just green believes nature should run its course, while blue uses artificial means to improve its self.

Green see’s red as maybe its impulsive little brother, both powers are based on instinct but green values the long term red values the short term, where green wants to build, red may more easily destroy.

Both Green and Black value death and conflict seeing them as natural parts of life, but in the end Black is greedy and self serving this goes against Green’s beliefs of community over self. 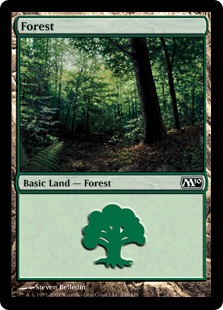 There are some abilities that green cards have that are to key to them.

Trample and Regenerate are two of my favourite ones.

Trample – Basically if you attack and your opponent blocks, they will still take some damage.

Regenerate – stops your creatures from dying

Another great feature is reach,one of Greens greatest rivals is Blue and Blue has a lot of flying creatures, to counter this Green has reach, a very useful mechanic allowing them to snatch those pretty little birdies out of the sky. 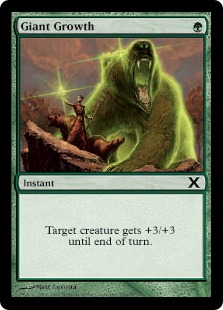 Other running themes through green is its ability to get more lands, this is very useful and can stop you from missing a drop, very rarely will a green player be out of manna, in fact Green players often find them selves playing higher leveled monsters than their opponents Since Green hates the artificial it has a lot of nice mechanics and cards to deal with artifacts that other players may use, so if your opponent pumps up a card with a nice piece of equipment it can be nice to destroy it leaving his character in a bad situation.

As you can see Green is a direct colour, in it you can summon massive packs of weak creatures or even huge beasts the size of mountains, its going to have both numbers and powers, all it lacks is tricks, you wont have many alternatives to avoid direct confrontation, so if your a direct person who likes to be upfront  this is the colour for you I would advise picking up the green deck and giving it a go.

Anyone else been watching the SDCC at home panels?
Best investment this year
As always @audible_uk / @audible are helping me survive night shift and with Wheel of Time about to be released it just seems fit to revisit the series.
My Tweets