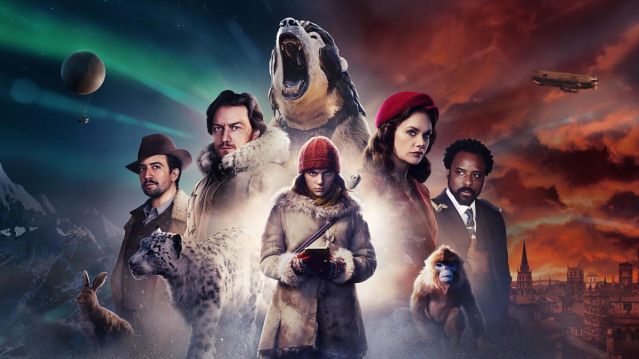 Stacey Wilson Hunt moderated the panel and kicked things off by asking about what it was like adapting such a successful book into a television series. Jane Tranter is very happy with the audience reception, stating “The most gratifying thing is that fans of the book have become fans of the TV adaptation”. She clearly appreciates the fans calling them “passionate” and “intelligent”. Jack Thorne echoed this but also gave an insight into the writing pressures he felt – “The hardest thing in adapting was the denseness of Philip’s world. Philip is a wonder and trying to do justice to him was the hardest part of my job, but it was a wonderful thing”. When asked if Philip Pullman had seen the show, Tranter confirmed that he had and he had reached out to a lot of people involved in the show – “It was really gratifying to see his reaction”.

Pullman even gave his blessing for them to do a stand alone episode in season two that explored what Lord Asriel was up to. Asriel doesn’t really appear much in the second book, The Subtle Knife, but they still wanted to explore his journey. Sadly, that episode was due to start filming in March but production was shut down due to Covid-19. This means that the season will now only contain 7 episodes instead of the originally planned 8. Despite this, Jane Tranter considers them fortunate as they had managed to film all other episodes, thus ensuring that season two won’t be delayed – “We’re completely on course for transmitting when we were actually meant to be transmitting”. Also they suggested that they may revisit the Asriel episode as a standalone in the future.

Shifting focus to main character Lyra, Hunt asked actress Dafne Keen what had changed for her moving into season two. Keen explained that at the start of season one Lyra was a very open person and trusted everyone but due to the events that transpired is now the complete opposite and lost all her trust in people. This will play out in season two but Keen suggested that the character Will Parry will bring her out of her shell and help her to trust again. Jack Thorne elaborated further – “What Philip has written in The Subtle Knife is a beautiful poem about trust so season two is all about trust”.

Will Parry wasn’t seen much in season one due to his character actually first appearing in book two of Pullman’s trilogy. The decision to bring him in early was to show more of his backstory. Amir Wilson admitted to feeling a little bit of pressure to do well in the role – “When you’re bringing any character to life that’s based off someone in a book, there’s a pressure to present them as how they are in the book but also adding a bit of yourself to that character and making it your own”. His co-stars assured him he did a great job.

Another person who everyone thought gave a fantastic performance is Ruth Wilson. In a brilliant move, Wilson gave a nod to the show and her daemon by having a monkey in the background. She clearly has loved taking on this role explaining that to her, “The best characters to play are the ones you never truly understand. It’s a struggle to work out who she is”. However, she did enjoy getting to know Mrs. Coulter and her reasons for why she is the way she is in season two – “What was really joyful in this season was to get underneath her circumstances more and what she’s had to deal with”. Wilson also suggests that the audience will see a change in Mrs. Coulter – “By season three, we see her as a completely different person. She’s alone a lot this season so there’s some self discovery”, adding that “In great fiction, the more you dig, the more you find”.

Also finding great satisfaction in his role is Lin-Manuel Miranda. The book series is especially important to him as it was one of the first novels that him and his wife read together – “We fell in love with this world as we fell in love with each other”. Miranda described playing Lee like going to space camp – “It’s a joy”. Him and Dafne Keen really bonded on set due to the fact that they both speak Spanish and love showtunes which provided a good foundation for their on screen relationship. Season two will see that relationship tested as they spend most of it apart. Miranda confirmed that Lee will spend most of the season “trying to get Lyra back”. He also admitted to missing Keen this season which she reciprocated.

In opposition to Lee Scoresby’s heroics is the villainy of Boreal played by Ariyon Bakare. Bakare pulls no punches when describing his character – “His internal drive is ambition; he just wants to be on top. He likes power, he’s a megalomaniac”. Bakare had never played a villain before His Dark Materials. He’s clearly doing an excellent job though as he states that he’s playing them all the time now. He’s also admitted to getting some strange DMs and fan requests.

Someone who is probably no stranger to DMs and fan requests is new cast member Andrew Scott who has appeared in Sherlock and Fleabag. Scott plays John Parry and described the experience as exciting but intimidating – “You don’t want to come in and mess it up”. A lot of his scenes are with Lin-Manuel Miranda with whom he bonded with over a love of Judge Judy. Scott also introduced Miranda to Percy Pigs, a British confectionary snack. Another friend he had with him through the season was a former co-worker. In a Comic Con exclusive, he revealed that his daemon is being played by Fleabag creator/star Phoebe Waller-Bridge. He thinks having her works extremely well for the daemon/person relationship – “It’s all about companionship and friendship, and that’s how I feel about Phoebe”.

With the introduction of Scott and Waller-Bridge as well as the already established very talented cast members and writers, season two looks like it may be even better than the first. Thankfully, fans won’t have to wait too long as it is set to air in Fall this year. UK viewers will be able to watch on BBC and US viewers can watch on HBO. If you fancy catching up on season one, all episodes are available on streaming services BBC iPlayer and HBO Max.