The History. The first Sapporo Snow Festival was held in Odori Park in 1950, with only six snow statues made by local high school students. Beyond all expectations, the festival attracted about fifty thousand people and soon became a major winter event of Sapporo. If you have been following us for the past year you will know that for the second year in a row we visited the Sapporo Snow Festival and just like last year we really had a blast.

Every year the festival see’s gorgeous snow statues sculpted by not only people from Japan but also people from around the world, which really brings a wonderful sense of comradery. With some of the most stunning Snow Sculptures I have ever seen, a fantastic selection of food, lovely locals and great souvenirs this festival really has something for everyone. Below are a handful of my favorite sculptures and also one shot of the entire festival ground. 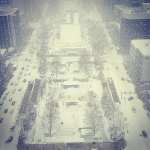 Of course the major highlight was the sculpture of the Star Wars Droids. Throughout the nights of the festival we where treated to this behemoth of a tribute to one of my favorite franchises. Only did they create a massive R2D2, CSPO and BB8 but they also built an X-Wing out of ice. If you where patient enough you could even get your photo taken in it.

Not really sure how to describe this other than adorable