This was an interesting issue in that it was more of  Rita plot-line than anything else. To remind you where we last off, Jason and Trini, trapped on a hostile alien planet, where stalking after Rita and her savage alien minions. Meanwhile Rita reclaimed the Green Power Coin, while both of their mutual factions where struggling to adapt to life without them. 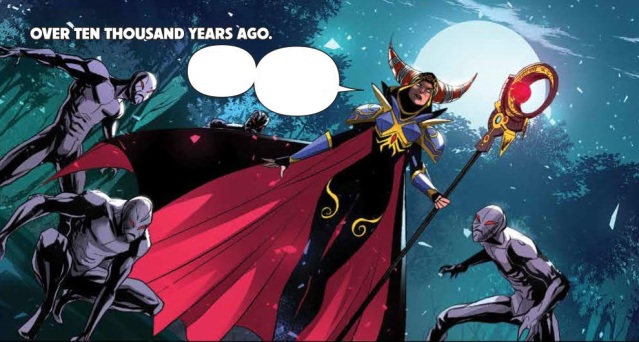 Issue 16 reveals something very interesting, we finally got the origin of the Green Power Coin. It turns out that Rita had originally sent a thief of hers to steal the coin from Ninjor himself. Of course shortly after doing this he takes the power for himself and tries to fight his former master. It is interesting to note that in the past the Power Coin did not come with its infamous gold shield, the one that would help the Green Ranger stand out so much from his future team members.

Not only did that past thief betray Rita but her chief warrior on this alien world also betrayed her, which probably explains why she decided to test the loyalty of her own subordinates in the same plot line. Yes Baboo was never planning on turning against Ria, this was all a clever ruse. It shows that she sees the limitations of her style of leadership, which helps make her even more of a threat.

Of course this wouldn’t be much of a Power Rangers comic without any Rangers and like the previous  issue Trini really is the stand out character. She takes charge of the team and formulates an excellent strategy, not only that but Jason lets her, and it’s not that he submits he simply knows that in this situation she should lead and he steps aside and follows. This shows great maturity.

Not only do Jason and Trini grow in this issue but the rest of the team do as well, they each get the opportunity to swap positions with another team member, this helps them develop as a team, it deepens their bond and makes them a far more powerful force. But it also causes the group to be closer, which ironically may be the wedge that keeps Tommy from wanting to join them team when his time comes.

I cannot praise this series enough, it has taken something a little silly and made it into something truly wonderful.