I have seen this episode take a lot of fire online because people hated seeing Liv on pick up artist brain, personalty for me I found it funny, she played douche all to well, with one particular highlight being Liv looking at Chase Graces and boasting to Clive that she had slept with him. For the most part this was not the most interesting brain but I think the writers did that on purpose. They would use this brain to make the show more light hearted while also showing that Levon is a pretty decent guy and one we should trust. Still though Liv is the main character this week her story was the least important. In this weeks episode the spot light was really on Clive’s love life and how Fillmore Graves are choosing to run New Seattle. 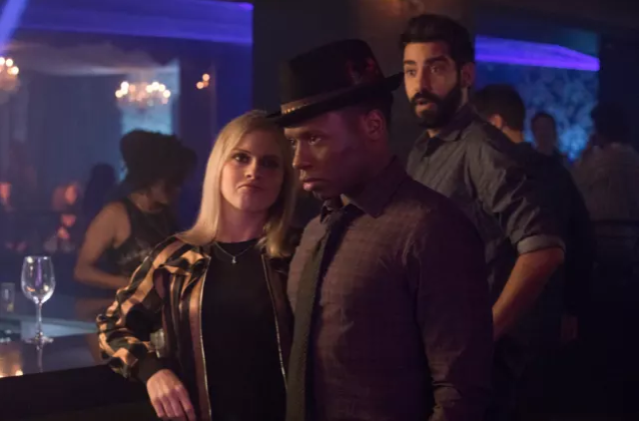 Clive is feeling down, he knows the women he loves has been out meeting other men, he knows he cannot be with her, he decides to go out for some meaningless sex with Ravi as a wingman to help him meet women, with predictable storytelling we have Liv appear while on pick up artist brain. In the end Clive gives up at meeting anyone and instead chooses to pay for sex. This is an important decision from the writers as it shows that Clive was not doing this in a need to cheat, nor was he looking for emotion he was doing this because he was heart broken by Dale and feels on some level rejected by her so he chose to pay for sex, its just this turned out to be the wrong decision. In the end we found out that Dale never slept with any of her suitors and at most kissed one yet she uses this to make Clive feel bad, which to be seems very out of character for her. In the end they should have talked their problems out like adults and sorted this out far quicker.

Fillmore Graves stopped walking the line here and officially crossed it. Chase takes on the role of autocrat with glee after one minor paper writes one bad article about him stating to his Mayor and District Attorney that:

“You wanna know when democracy doesn’t work? It doesn’t work when your species is on the brink of extinction.”

Having his men go close down a newspaper was a very poor move by him, I mean are we to assume that either he is at the end of his tether or did Chase just make a massive strategic blunder, in this situation the logical thing would be some charitable work or a puff piece to make him look better. Sadly Chase is a soldier and chose to respond to this threat like a tired and stressed soldier he lashed out with brute force.

Major continues to move up in the ranks full of conviction that he is doing the right thing and in a sense he is, he is doing everything to ensure the survival of his species, the only problem is this isnt Major, I have said before that I feel that he struggles with the mistakes he made in the past and has decided to embrace the rule of law as a way to make sure he never goes off book again, but the way he smiled when he was openly called the Chaos Killer was a little chilling. That particular line just shows how things can stick, Major was proven innocent of that crime yet he is still tarnished with it.

Liv has begun to take some major steps in running the now defunct underground railroad service, first she approached Brother Love to see if he could help with her food supply, this lead to a few hilarious lines and now Liv knows that Angus is her nemesis father. Once she finds out about his true character it should have some interesting ramifications. Away from Angus Liv manages to earn Clive’s suspicion and get caught by Peyton as she gets hold of the equipment to help support her cause. Getting caught by Peyton seemed rather stupid and out of character for Liv to be that careless, but whats next,  will Peyton follow the rule of law or is she sick of Chase Graves autocratic regime and will she try and through a wrench into the mix.

Don E he finally gets to do something cool and uses a Katana to chop off the traitors head that freed Angus, but where does that leave Blaine, what is his master plan for this situation and is he even scared?

Not the flashiest pictures but I was just glad to get back to the cinema last night. @moviehousecinemas did a fantastic job with social distancing and the atmosphere was very relaxing.
I've been looking for something different to watch and came across Uncanny Counter on Netflix
@dynamitecomics have a lot of great releases this week. With not 1 but 2 new #redsonja books. And three fantastic collections for The Black Terror, Vampire hunting fun with Chastity and the awesome cross over of the Evil Dead and Xena.
My Tweets