I was lucky to be young when TV was great, in fact I have had great TV all my life. But in my teen years one of the best shows on was Teen Titans, a show that to this day I still watch. It was a fun show full of action, jokes, great characters and it had this great original feel to it, one that really had me hooked right from the start. Moving ahead in time and I am in my early 30’s still loving all things dorky and nerdy and here I am with the distinct honor of reading and reviewing the new Teen Titans comic book series. With Damien Wayne at the head of this team there was no way that I was going to miss this chance. The story follows Damien’s attempt to find his place in the world and in this personal mission of his he chooses to find something he both has and lacks family or more specifically the family he gets to choose for himself, comradery, ohana, friendship a place where he truly belongs. Of course being the son of Batman raised by assassins he lacks the certain nuances needed to make friends and goes about it in a very Damien-esque way, which involves death traps and what I can only assume is a griffin. This is a great start to the series flicking between the Titans in a very precarious situation and Damien contemplating what it means to be him, a teenager, a superhero and alone, all the while having a very touching conversation with Alfred over a birthday cake. This issue has some real depth in it and has teased us with a very cool follow up involving a team that will give the Titans a run for the money. This issue deals with the legacy of the Robins, the league, the Titans and the Wayne’s, young Damien bares a lot on his shoulders and he is one of the few with the ability to take it all, but only if he would ask for some help. 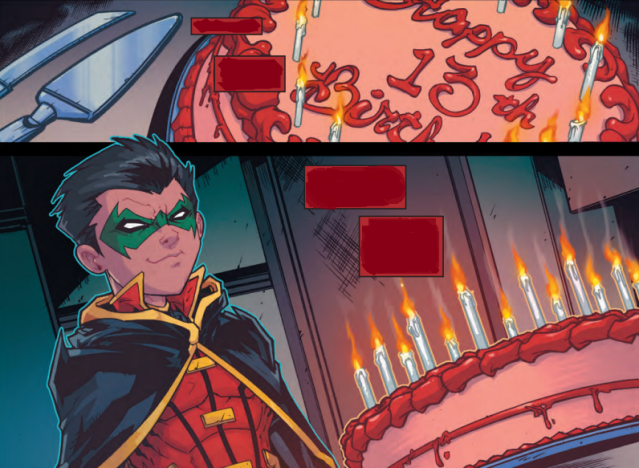