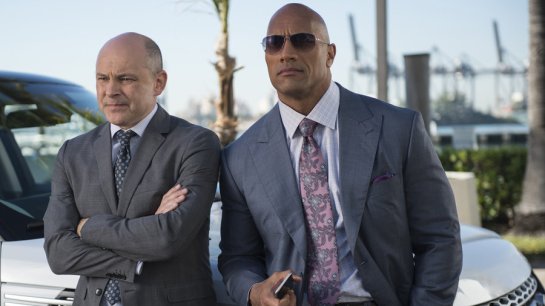 We have seen The Rock kick ass in the ring and on the big screen (In the delta quadrant, playing his own father, performing with Wyclef Jean, being a gay country singer and we have even seen him officiate a wedding) and now on TV as a financial adviser. We see him in what I perceive is HBO’s new Entourage,only instead of film stars this one is all about NFL players. OK it may lose some of the Hollywood appeal that Entourage has but it has the same sort of humor and a whole different kind of drama.

I’ve watched a few episodes of season 1 and I have to say it’s a damn good watch. I think part of this is down to The Rock being so damn likable, he could physically and literally carry the whole show himself. But luckily he does not have too as there is a solid cast of comedy and serious actors. It’s hard to say where this show will go but so far I would consider myself a fan as it’s fun and fresh. Besides Mr Dwayne Johnson pulls of a suit like no other.