Widdershins-No Rest for the Wicked Review

After a number of successful Kickstarter campaigns, Kate Ashwin has been able to put her recently acclaimed web comic Widdershins to print and into a series of stand alone books. Widdershins is a magic-run, Victorian era town were the residents continue to resist the surrounding industrial revolution in favour of their magical traditions, each book being led by a different set of characters; mages, merchants and reprobates alike. I got hold of a copy of Book Two: ‘No Rest for the Wicked’ recently which, with no prior knowledge of Ashwin’s work turned out to be an appreciable introduction into the Widdershins universe and Ashwin’s comedic and inventive style.

‘No Rest for the Wicked’ focuses on drifters Jack O’Malley and Heinrich Wolfe who take a few days’ stay in Widdershins for some money making with their combined talents. Wolfe is a talented musician whose violin playing soothes even the most factious of audiences, confirmed by Jack’s unusual ability to see the moods and spirits of anyone around him.  Jack’s ‘skill’ also lends itself well to the art of poker, resulting in a seemingly low risk system of busking by day and gambling by night from town to town. Of course it all gets a bit more hairy when they arrive in Widdershins were magical mischief is not so easily unnoticed. When his power is revealed in a hustle gone wrong the Widdershins authorities force Jack and Wolfe into working on an official basis for the Mayor, keen to use Jack’s ability to detect magical ‘malforms’ – malicious manifestations of magical energy that have gone rogue – of which there are plenty in Widdershins. So beings their new career in a part Sherlock Holmes, part Ghostbusters line of work that proves hugely entertaining but like with all good Victorian mysteries, not everything is as it seems. 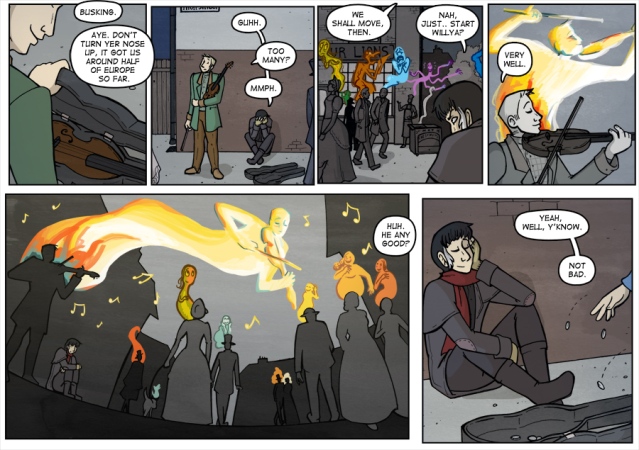 For such a short story there are many interesting ideas crammed into this chapter, Ashwin has taken some familiar concepts and created something quite unique that immediately displays her own distinctive style throughout. It’s easy to read but not in a way that means it lacks enough substance, the characters are likeable and the dialogue reads well without feeling slow or unnecessary despite the number of key Widdershin’s residents that you’ll encounter. Another important element is the comedic tone which drives the story in the writing and visually in the often slap-stick art. The success of each of these aspects ensures the story works. Yet, Widdershins is very much a light-hearted and gentle bit of storytelling and maybe not enough for those who enjoy a bit more of an edge or darkness to their comics. However, I am normally one of those people, so maybe it’s interesting combination of magic, sleuthing and mystery brings enough intrigue to be worth a look regardless. 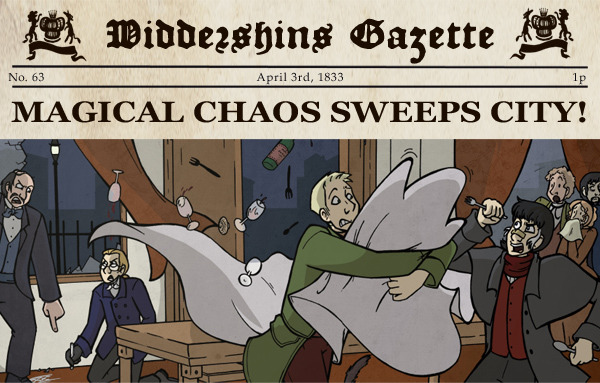 After reading ‘No Rest for the Wicked’, I did a bit more exploring on the official website and would say that Ashwin is successfully building a stylish and coherent universe that is worth reading beyond one short story. Her fourth printed book is now available but you can keep up with Widdershins at www.widdershinscomic.com