Star Wars – From then till now

Its been a few days and I’m still blown away by the new Star Wars trailer. I’ve grown up with this series. In the spirit of the times I’ve decided to do a quick run down on some of my favorite Star Wars memories and then do a brief break down on the trailer. I have the original films on VHS (this is what we had before DVDs) and I have watched them countless times, even spending one Christmas morning watching them all, oddly in reverse. I was at that perfect age to catch them on the re-release in the cinema, sadly I was almost first in line to see episode 1. I was young enough that I actually enjoyed it. I’m a big enough fan to admit that there are still parts of Phantom Menace that I hate but I do enjoy a handful of parts in the film.

Can he pull this off?

I took a day off during my GCSE’s to go see Attack of the Clones and saw a midnight showing of Revenge of the Sith. I have copies of the original Clone Wars cartoon, the Genndy Tartakovsky one, which is one of my all time favourite cartoons. I even went to see the terrible clone wars film. I just don’t understand what was going on in that one, hell the cinema flooded that day and I sat through the film, so I’m dedicated if not anything else. But Star Wars goes beyond film, there’s the two CGI series, the second of which I actually have enjoyed. There’s comics, one of which is Droids which I have sadly lost.

It doesn’t stop there, we can’t forget about the Ewok franchise;the two films and a cartoon series. (Yeah I really wasn’t sure what the point was except maybe merchandising but hey two movies and a cartoon series, someone must have liked it.) This of course wasn’t the only foray into the small screen, we had the Christmas special and the Family Guy specials, the first two being so funny but the third kinda coming off as a little worn out but I still loved it.

We would be remiss not to mention the music. Star Wars is instantly recognizable by its music, thanks to John Williams. The opening crawl, the Emperor’s theme and dual of the fates, all being equally inviting and let’s not forget the disco tune that they also inspired. But yes the music is so recognizable it brings back memories to me of being in a queue at the Star Wars ride in Disney, or the hours I would inevitably make my family spend in the store afterwords.

This piece is just so dread filled but every time I hear it I cant help but smile.

This well this should be an abomination but…I wanna strut.

A true highlight of my childhood, I really wanna go again, I should mention though they modernized/bastardized this ride as I was shocked to discover when I was last on it in 2012.

My final round of memories comes in the form of gaming. Star Wars has created so many great video games, even some terrible ones, Attack on Naboo frustrated me. Beyond that there where so many games that I just loved. I have such fond memories of spending weeks over my 12th summer playing Masters of the Teräs Käs. I just want to point out that the Twin Bladed light sabers where featured in this game before the movies. Pod Racer was one of my most played games ever. It was a surprise birthday present along with some delicious Thornton strawberry candy. Moving on from that I ended up spending an entire Christmas Day playing Jedi Power Battles on my Dreamcast, which was a great side scroller and fun hack and slash times. After the days of Dreamcast I eventually moved onto the X- Box, just loving my times playing both Battlefront Games, this was my first true online experience in gaming, owning some newbs, repeatedly. Sucking up more of my time was the excellent Knights of the Old Republic, this game was addictive, I just needed more and more of it. Then again Star Wars wasn’t just confined to just being played at home, you could play it in the arcade in the form of the trilogy game. It was just glorious to play, especially the bonus levels and it was simple but fun and included odd challenges that made it wholly unique.

All that has led me to where we are now. The Episode 7 trailer dropped last week and it amazeballs. Ok it didn’t show us much but what it did show was just spectacular.

Opening with John Boyega in what may be Tatooine, not confirmed but looks like it. He is disorientated and looks a little freaked out. I know some people have been saying this does make sense as all Storm Troopers are White. One they are referring to Clone Troopers, and even in that case white is not correct. By the time of A New Hope the Emperor was recruiting soldiers and even after his fall when the Fel Empire came to power they where recruiting non-humans, so to sum it up Storm Troopers where not all white. Besides who say’s this is not a disguise of some sort.

So we have another possible Tatooine shot with a new R-Series droid, this one seems to be merchandising at its finest. Its no R2-D2 but i still want one.

Next we have Daisy Ridley on a vehicle that just looks like it belongs in the old school trilogy. Theories flying about that she could be Jaina Solo, once again unconfirmed but it’s not impossible.

JJ Abrams seems to have updated the Storm Trooper helmets and this shot gives a sort of Saving Private Ryan opening feel, with the soldiers prepping their weapons, like they are getting ready for a big battle of sorts. 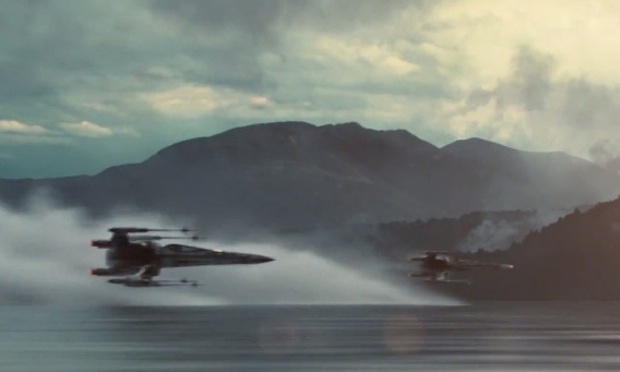 Next was the true money shot for me. A squadron of X-Wings skimming across the surface of a lake. So we can hope for cool dog fighting scenes. I hope this will be the infamous Rogue Squadron, in their bad ass X-Wings. It looks like the concept art coming to life, it’s just beautiful, stylish and retro all together.

With this shot at first I was like oh another Dark Side user, then I was like wow the light saber looks awesome, then I was like this looks AWESOME. Just look at that light saber, ok the hilt may be over the top and maybe it’s a little gimmick but still I love it and want one !!!

At this point I thought I was all Nerdgasmed out, till I saw it, the ship that ran the kessel run in 12 parsecs, the Millennium Falcon backed by some classic John Williams, complete with a couple of Tie Fighters for added effect, at this point I was lying on the floor half out of breath wanting more, but sadly it was over…for now.

There is a lot that the trailer did not tell us, like will they follow any of the already developed plots like Luke and Kyle Katarn starting the Jedi Academy. The Empire coming back but this not actually evil. The Yuuzhan Vong invasion, Han and Lei’s song turning to the dark side, Chewbacca’s family being in the main cast, Boba Fett rising to the pinnacle of Mandalorian culture or the thousands of other plots that could be used. Maybe JJ Abrams will ditch that all and do his own thing, at this point no one really knows, but so far what he has given us looks pretty amazing. It’s a series that I wasn’t there for the beginning of but it’s some how become quite a big part of pop culture and throughout my life, so yeah I’m pretty excited for what the future holds, sure some people say it’s unrealistic sci-fi, but you know what this franchise revolutionized the way we did special effects and it became an instant classic, with some very quotable lines, plus it’s the greatest form of cinema escapism possible, not to mention all the endless debates that the franchise has created. I’m not its biggest fan but by God I am a fan and can’t wait for this next year to pass me by.