Today I’m going to take a look at two Sprukits model kits by Bandai from A1 Toys, which I am excited about as I love collecting model kits and figures.

Well I guess the question of the day is what is a Sprukit?

Sprukits as Bandai call them are model kits that come with several trays of plastic parts with which you assemble together to build a cool poseable figure. Some would argue that it’s similar to Bandai Gundam Model Kits (Gunpla), however Sprukits are easier to build as the instructions are laid out well (in English) and it requires no scissors, glue, or paint.

With Sprukits you determine the pose. The light construction and articulation allow Sprukits to hold different poses that plastic figures would otherwise fall under their own weight.

Of course you could buy a Halo pre-painted figure which would have high levels of detail and quality, but with model kits it’s more about the fun of building the figure.

These Sprukists are cheaper then a pre-painted figure and just like Gunpla, you can add more details like weathering if you’re so inclined to do so and have the skills.

Constructing from the ground up is what Sprukits are all about. The joy of building with one’s two hands a figure is quite big in Japan. Bandai is hoping to cater to this area of interest overseas with the launch of Sprukits.

Sprukits are separated by 3 levels of model kits:

Level 1 is for beginners and will come with around 20 – 40 pieces and stand in at 4 inches. They feature 5 points of articulation and have a build time of around 15 – 20 minutes.

Level 2 is for more skilled modellers and will come with around 80 – 120 pieces and stand in at 5 inches. They feature a wider range of articulation and detail, they have a build time of around 60 – 90 minutes.

Level 3 is for advanced builders and will come with around 161+ pieces and stand in at 8 inches. They feature lifelike sculpting detail and are basically yoga masters in terms of articulation.  The build time is around 2 – 3 hours.

Currently Batman and Master Chief are the only level 3 Sprukits available.

The Sprukits I will be taking a closer look at today are the level 1 New 52 Batman and the level 2 Halo Commander Sarah Palmer. 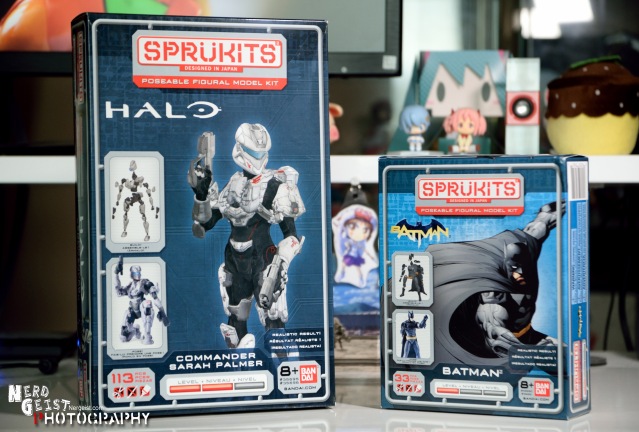 Taking a closer look at the Sprukit boxes you can see that the images take a priority over the text, which is simple and short.  The pictures consist of: some of the poses of the completed figure, any included extras like guns and some pictures showing you the tool-less process.

The reason for this is so that anyone can pick them up and understand that it is a model kit even if the words on the boxes are of a foreign language to them.  I know because I have bought my fair share of Gundam model kits and not one of them is in English.

What’s in the box?

First up is the level 1 New 52 Batman 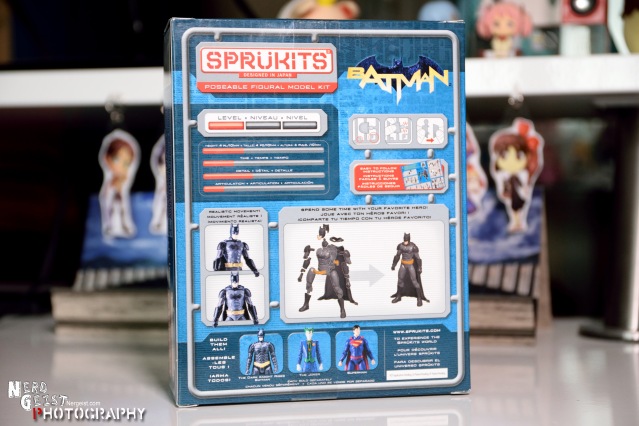 Well I’m sure everyone knows who Batman is and for those who are very sheltered or have just been born here’s a little background on Batman.

Batman aka Bruce Wayne is a millionaire who at a young age witnessed his parents get shot and murdered by a mugger in Gotham City.  The murder of his parents is what drove Bruce into the man he is today, a crime fighting millionaire who uses his gadgets and his detective mind to stop crime in the City of Gotham. What makes Batman such an interesting character is that he pushes the limits of what humans typically are capable of, he is a human with no supernatural powers yet is able to go toe to toe with the likes of Poison Ivy, Killer Croc and Mr. Freeze.

Included in the box are the plastic trays that hold all the pieces, some stickers to be applied to the figure and of course the all important instructions.  To tell you the truth I am not used to seeing so few pieces as someone coming from the world of Gunpla.  This is a good indication of how simple the level 1 beginners Sprukits are.

The instructions impressed me with how well laid out and easy to follow they were.  Each part of the build is separated into their own little colour coded area, which is identifiable with a symbol for the head, torso, legs, and arms.  This makes building so much easier and quicker then Gunpla.

Each of the plastic trays can be identified with a letter and each piece has a number next to them, kind of like Lego I guess.

The building process was for me was simple and took me about 20 minutes to build since there is no need for any scissors or glue.  The only issues I had were with the stickers as I am terrible at applying small stickers in model kits.

The thrill of seeing each part come together to form the final figure is so satisfying, after all who doesn’t want to marvel at their own work?

This Batman, which was in 33 pieces some 20 minutes ago is now a complete poseable figure. Standing at 4.21 inches tall this Batman really is petit in person but towers over any Kinder Surprise and has some nice attention to detail, like those abs!

The suit has all the creases, muscle budges and lines that you would expect from a Batman suit and as for articulation:

The head can be turned 360 degrees although there is no tilt so he can’t look down or up, just straight ahead towards his enemies.

The leg joints, that allows Batman to lean forward or backwards. 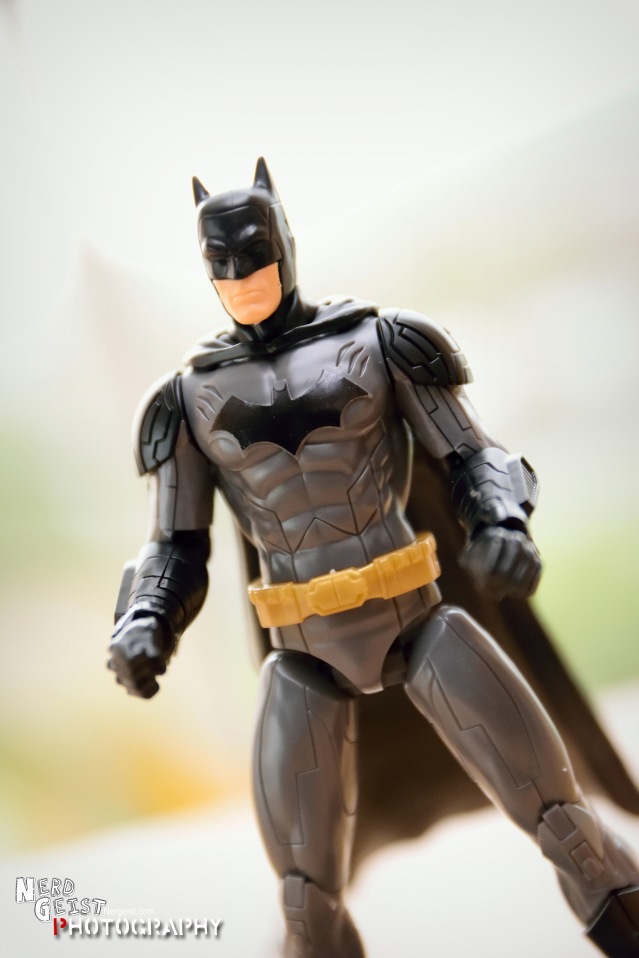 The elbows, which allows Batman to lower or raise his arms.

Last point of articulation is his cape which allows you to extend it outwards a bit. 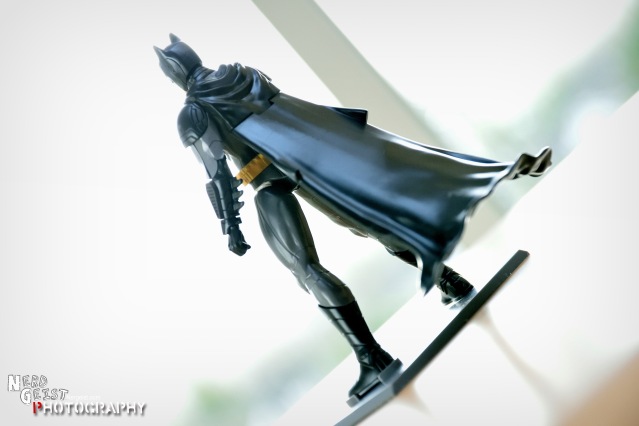 Although the poses are limited for this level 1 Batman, it still makes a very nice piece to have in your collection.  Perfect for displaying on your work desk, bookshelf or anywhere really as the small size and durable nature of the figure allows it to be placed in area where larger PVC figures cannot. 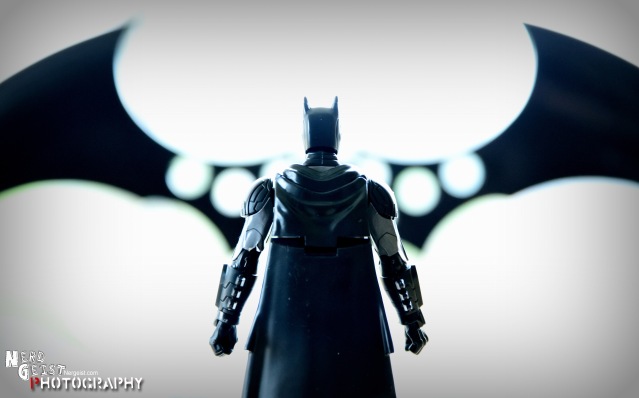 Oh yeah I forgot to mention that they came with a base stand for your figure.

Next up is Level 2 Halo Commander Sarah Palmer 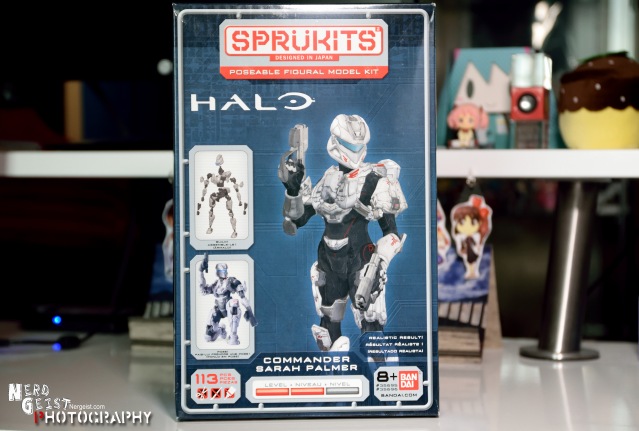 Who is Commander Sarah Palmer?  Well to be honest even I didn’t know who Sarah Palmer was until this model kit fell onto my lap.

She only appeared in the cut scenes in Halo 4 and is one of the two playable characters in Halo Spartan Assault.

Sarah Palmer is one of the first recruits into the Office of Navel Intelligence.

Her innate leadership skills and physical prowess helped her lead others as a Lieutenant and thanks to her continued loyalty to the UNSC she is now Commander Officer of all Spartans on Infinity.  She is one of the first SPARTAN-IV to be seen duel-welding, which is a pretty important in Halo Spartan Assault to help you not be overrun by enemies.

Fun fact: Sarah Palmer is voiced by Jennifer Hale, who is also the voice of the female Commander Shepard in Mass Effect and Samus Aran in Metroid Prime series. The included pieces of the Sprukit Commander Sarah Palmer are a good bit more substantial then the Batman Sprukit with 113 pieces compared to 33 pieces.  The instruction is now more like a poster then a leaflet and can be a bit intimidating to complete beginners.  Fortunately I have just mastered a level 1 Batman and I am ready to tackle level 2.

This build took me a lot longer, about an hour and a half, with some breaks in-between as I have terrible concentration but the long journey was wroth it for the end result.

Totalling 113 pieces and standing in at 5 inches the level 2 Sprukit Halo Commander Sarah Palmer is complete.

As you can see Sarah’s Spartan IV armour has a great amount of detail and a much wider range of articulation.  The greater level of detail is due in part because of the greater number of pieces, like one of Sarah’s legs consists of 10+ pieces compared to the 3 of Batman.  This creates layers that help form the armour look of the Spartan IV armour. 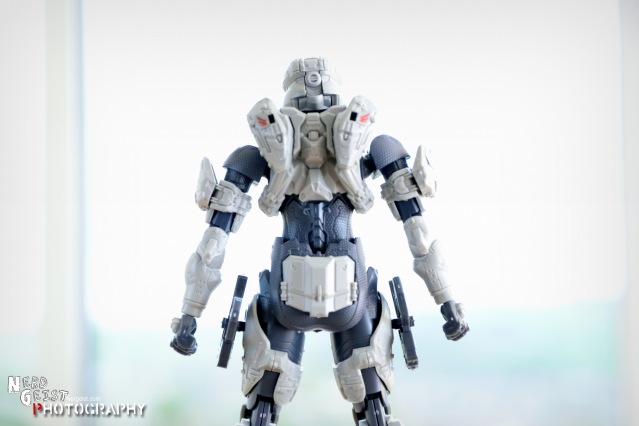 The stickers help define Sarah with the emblems and UNSC on the shoulder.  They help an otherwise gray Spartan stand out more, but the grey canvass really does seem to scream paint me!  I mean if you’re so inclined and want your Halo colour scheme from your Halo multiplayer Spartan.

Sarah also has a more natural range of articulation, allowing for a much more flexible and poseable figure.  The range of motion is big but limited at the same time, much like how movement would be limited if you actually wore Spartan Armour.

There are a few interchangeable hands and two guns for all the duel-welding poses. There are also these clips that you can attach to the legs to holster the guns. 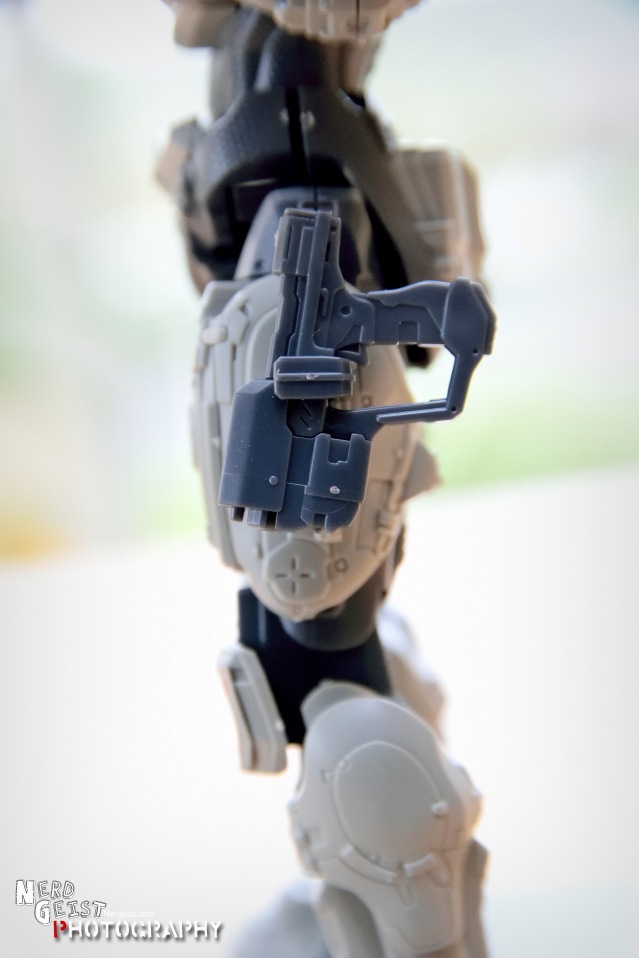 The Spartan armour look is created faithfully with that suit with armour over it look to it, which I always thought looked cool and would be totally awesome to have a Halo Spartan suit in real life. 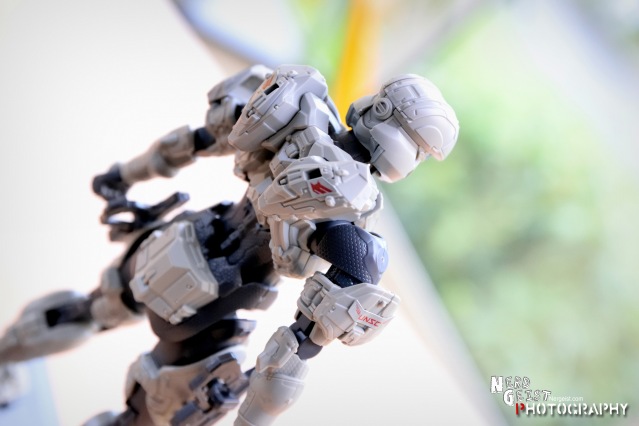 The visor is a bit of plastic and not a sticker which I am thankful for as that would have been a pain to stick on. It also adds a bit more depth and separation to the helmet.

I had some stairs lying around so I though I would take a few photos with them.  Yep Spartans can blend into any environment and look good.

Here is Commander Sarah Palmer standing next to New 52 Batman and towering over him like all Spartans do. OK well maybe just Master Chief as he is about seven feet tall.

Sprukit Halo Commander Sarah Palmer is a great figure to have and a good starting point if you’re used to building model kits.  The fact that the armour sections are grey is great news for Halo fans who want to paint it and really make it their own. It still looks great without the paint as Sprukits are designed to not require it, or glue, or scissors.

Sprukits are a great way to get started on model building, as unlike many other model kits everything you need to built your figure is in the box and it’s super easy to built.  I recommend these Sprukits to anyone who wants something constructive without being overly complex. Or if you can’t afford Bandai’s Gundam kits because those are expensive.

A1 Toys is one of the largest toy retailers in the United Kingdom and include a wide range of specialized and family gaming products to cater for all your gaming needs and collectable interests.

A1 Toys helped lunch Sprukits in the UK and were present at the London MCM Comic Con Expo October 2014 in which Bandai and Bandai Games teamed up to launch their new line of products.

Sprukits is the start of something I am personally interested in; being a fan of Gunpla and all the construction kits Japan has to offer.  And there certainly is a market for them in the UK considering all the Gundam model kits you see at conventions.  Hopefully Sprukits will expand in the future with more characters and from many more different universes. Soul Calibur maybe?

You can check them out at: http://a1toys.com/

And follow @BandaiToysUK closely for all your Power Rangers, Ben 10, Tamagotchi, fixes and more.

And @BandaiNamcoUK for glorious game news.

Lastly check out these Sprukit stop motion videos showcasing the articulation of Sprukits.