One of the short films to be shown at The Comic-Con International Independent Film Festival 2014 is EVE (2013), which was written and directed by Eric Gandois.

Summary: In a distant future, nature has taken over the earth, becoming a menace for the survival of the humankind.

Short films need to be able to engage their audience in such a short time frame. Not only that but you have to figure out how to tell your story in a way the viewer would understand without compromising the vision of the film. EVE stands out, especially since not a single world of dialogue is uttered in the six minutes that this film lasts. No dialogue means a film can reach a wider audience as you don’t have to worry about reading subtitles or dubbing. The only drawback is how to keep the viewer watching when no words exchange on screen? This is where music or the soundtrack plays a significant part in portraying the intended emotions.

The film starts off with the humming sound produced from a spinning fan, this just reminds me of someone having woken up, in a daze and wondering where they are? Maybe I’ve seen too many films and TV series about a post apocalyptic world, including The Walking Dead, Falling Skies and Edge of Tomorrow. The camera pans in and we see a couple asleep, there are many fans spinning in the room. It brings up an intriguing question as we all wonder what all the fans in this one room is for? 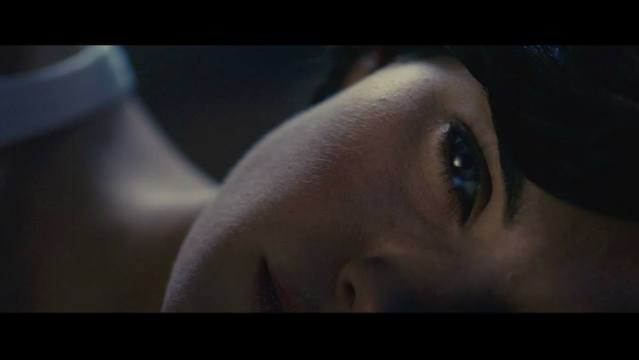 Eventually they stop spinning and the female (EVE?) wakes up to what looks like floating blue, almost pixie like dust. It’s not long until she gets up in a state of panic and quickly walks over to turn the dials on a ‘Cycle Control’ machine. This is the first hint that the fan’s are all part of a air purifying machine. She looks up, the fans are working again but this time the mysterious shining blue dust is blowing in through the fans. She goes and grabs a gas mask, it’s then we realize that this could be a potential threat. I’m gonna stop there before I spoil the rest of the film.

Eric has managed to fit quite a bit in only six minutes of film. If you are going to stop by The Comic-Con International Independent Film Festival , I highly recommend you check this film out. After all it’s only a few minutes long, so it should fit somewhere in your Comic Con schedule.