Can you tell us about your company Neon Martian?

What we do is we import Manga, Anime related, primarily figures from Japan where some of the companies such as Good Smile and Bandai are located.We bring official Japanese licensed products that you would find in Japan but offer them over here (UK & Ireland). We have products ranging from small trading figures to the premium products.

Can tell us about your relationship with Japanese companies such as Good Smile ?

With some of the companies we have direct relations with as they are trying to expand their products outside of Japan particularly within Europe. I  think over the years they became aware of the problem with counterfeit products and how that devalues their name as people assume it is the official product.With the increasing popularity of  Japanese Animation and Japanese Studios they are keen to promote their products.

How could you spot  a counterfeit from an official product?

There is usually visual differences in figures, alot of the times although they copy the packaging the boxes usually aren’t so good. There is also colour variances, often you will find their is defects within the figure themselves such as there might be chips in it. Most of the studios put a hologram licensed sticker on their boxes since copying that is really quite difficult and not cost effective as well for potential counterfeiters. You can check the websites of exhibitors and stalls to confirm it’s officially licensed. Counterfeit products  also tend to be sold out of their boxes. Companies like Good Smile also have an English website now so that customers are aware of counterfeits and how to tell them apart from their official products. Price is also another way to tell, if someone is selling a high end product for £20 it’s less likely it’s the real deal. If the price is too good to be true it probably is.

You are gonna be at MCM Belfast and Dublin Comic Con, what are your thoughts and do you think the turnout for those events will be big?

Yes i think so, with the  MCM group organizing the shows they can get high exposure and the big voice actors. It’s not just about Anime & Manga, there’s comics, films etc. They can also cover alot more cultures and bigger fanbases that some other events aren’t able to do. 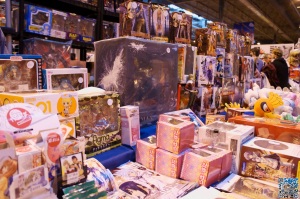 Will you be supplying Attack on Titan products?

Yes, they will hopefully be released next year around end of spring and beginning of Summer.

You can purchase the products you see in the photos on their website http://www.neonmartian.com