Looks Like FF7 Will Be An Alluring Mix Of Action, Nostalgia and Mark Hamill

Final Fantasy 7 is almost upon us and it’s about time for us to get another brand new trailer. Boy does this trailer do anything but disappoint in it’s short three minutes it packs in a lot and I feel its my duty to help unravel some of this. Full note is that sadly back in the day I went with N64 not playstation so in a complete act of heresy this remake will be first play through of Final Fantasy 7 – though you will not find my knowledge completely lacking.

Right off the bat we are treated to shots of Avalanche in action. Without going into to much detail AVALANCHE is a group of Eco-Terrorists that the majority of the early protagonists in the game are affiliated with. One notable member on display in the trailer is Jessie the tech expert of the group.

Though the beginning of the trailer was action packed we quickly move to a tender moment between Tifa and Cloud. To me this is nice, as it shows that the story is still important and they have not given into all out action.

Of course what Final Fantasy trailer would be complete without an appearance by the games big bad Sephiroth.

Any Final Fantasy fan worth their salt will be familiar with this church. I have even kind of visited it…

I feel like this dress will be a top cosplay come 2020 and after seeing it now I am seeing why there is still debate over who is the best girl in Final Fantasy 7.

Square enix snapped and i thank them pic.twitter.com/jgJq1wKqYF

When he gives you this look: 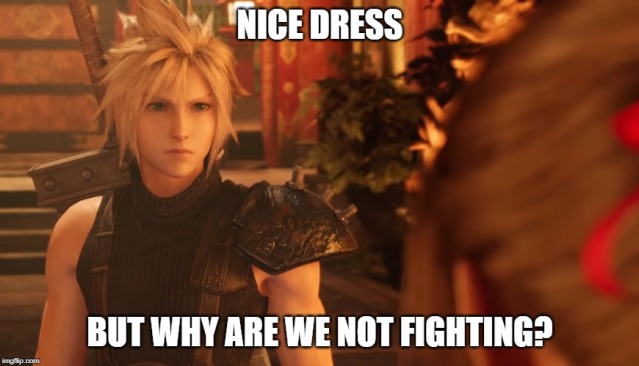 Mark Hamil will be playing the role of the perverse Don Corneo – which is a fantastic addition to the cast.

Even Tseng the leader of the Turks even makes his appearance

A new upgraded version of the gym mini game – which looks like it could be strangely addictive.

President Shinra is set to appear as a rather ominous looking hologram. Looks like our heroes are scared shitless in this shot.

The first of two summons, Ifrit has finally been revealed Ifrit also called Jinn and Iflyte, is a recurring Fire-elemental summon in the series. His signature attack is Hellfire, sometimes called Inferno or Flames of Hell, that deals Fire-elemental damage to all opponents. He is one of the most frequently appearing summons and is often a rival to the ice summon Shiva.

And on the subject of Shiva, here she is. Shiva is a frequently recurring Ice-elemental summon. A blue-skinned woman with clothing of the same color, her signature attack is Diamond Dust (sometimes called Gem Dust, and Transcendantale in the French version).

All in all this is looking like a pretty great little game and I for one am looking forward to it. 2020 can not come soon enough.

I have too many Snorlaxes
Deep fried oreos count as lunch right ?
Weirdest impulse purchase i have made this year. A scented overwatch candle