Detective Pikachu Got Me Nostalgic For The 1990’s

I honestly do not think I ever really left the 90’s. It truly was the worst of times and it truly was the best of times. Filled with terrible fashion, a wide variety of music and me desperately trying to be the first amongst my friends to learn the lyrics to the The Fresh Prince of Bel Air? For so many , it was a defining period of their lives, ten gloriously tacky years that made us what we are today. And none of us have to look too far to find ever present reminders of that strange period of time. In fact, you might not even have to leave the house.

To celebrate the upcoming release of POKÉMON Detective Pikachu digitally on 2nd September and on DVD, Blu-rayTM,3D Blu-rayTM, 4K Ultra HD and 4K Steelbook on 16th September, we’re putting on our detective caps and discovering what nostalgic toys from the 90’s we can all still find in our attics!

I had originally planned for this to be only 5 long, but I had to channel my inner Clueless and tell myself “AS IF”.

In the end the list needed to go to ten.

Most of my Micromachines are long gone, but still to this day in my parents attic you will find my collection of Star Wars themed Micro Machines. These where play sets that looked like the head of a Star Wars Character, then when you open them up you will find a little diorama featuring your favorite scenes from the original trilogy. R2D2 and Vader where my favorites I think I actually played with them so much that I broke them both. 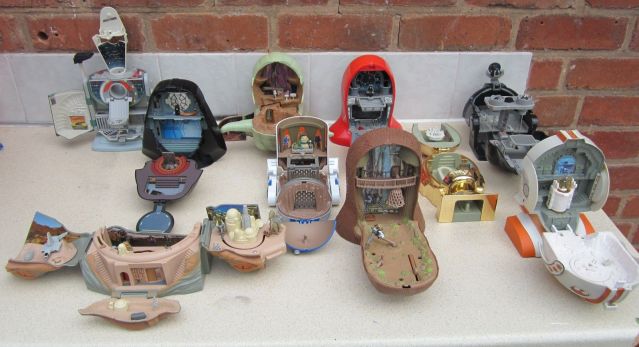 Watching Home alone 2 all I could think of was – “If I had a Talk Boy I could do anything!”

Granted this proved false but if you have never heard of a talk boy you will know that the Marketing really over sold us on its abilities. The Talkboy was a portable variable-speed cassette player and recorder manufactured by Tiger Electronics in the early 1990s. It was originally conceived as a non-working prop for the 1992 movie Home Alone 2: Lost in New York, but capitalism demanded it be real. So on November 20 1992 the world was treated to a fully functioning talk boy. I still remember spending Christmas morning “pranking” people with it – ye looking back I was probably just really annoying my family.

I never really collected these, but my sister did and holy good lord did that collection quickly grow out of hand. A Troll Doll, for the uninitiated, is a type of plastic doll with furry up-combed hair depicting a troll. Every other decade they seem to pop up and gain an almost cult like following. Well in the 1990’s they hit an unprecedented level of fandom that lead to Tv shows, Video Games, Spin Offs, Knock-Offs and of course hundreds of Troll dolls for all to buy. In many ways they where the funko of their day.

What 90’s kid didn’t know the lyrics to Power Rangers?

Just typing that question brought back so many memories, memories of me not only watching the show but me building the Zords. They where the perfect mix of dinosaur’s, bright colors and giant robots for me, out went the Dinobots and in came the DinoZords. Then there was the Dragonzord, a robot so awesome that it shot missiles from its fingers and had a drill for a tail. I am a 33 year old men and I am not to ashamed to say that even I have eyed up a Dragonzord on ebay, luckily I have held off on that purchase – for now. 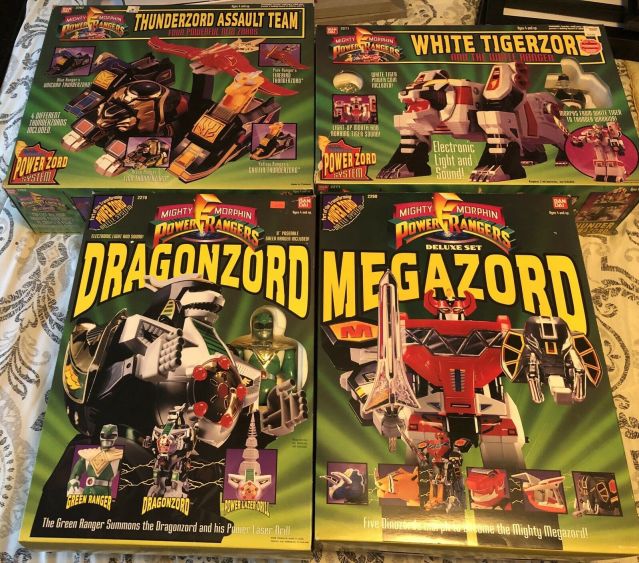 Ok Polly Pockets came first but for me it was always all about Mighty Max. It is hard to describe them, but they where like a miniature Toy box that was designed to look like a monster and would open up to be a little “base” where villains would try and trap Max. The original toyline consisted mainly of “Doom Zones” and “Horror Heads.” “Doom Zones” were small play-sets with a horror theme and featured miniature figurines of menacing creatures and the hero Max, a young boy with blond hair, jeans, a white t-shirt with a red “M” on it, and a baseball cap (the color varied based on the play-set purchased) which also always had an “M” on it. The “Horror Heads” were smaller-sized play-sets, also shaped like the heads of creatures and contained miniature figures. Such a simple toy but I had hours of fun mixing and matching my sets, my favorite two being the snake and scorpion themed sets.

Full disclosure it was between Nerf and Super Soaker for this spot – but Nerf just edged in for the win.

Nerf Guns were, and still are, a terrible gift idea for children and so adults. But no home in the 90’s was complete without the offensive potential of sponge and plastic in the hands of hyperactive children. A veritable arms race exploded, increasing the demand for bigger, better and more absurd guns.Children gathered endless arsenals, waiting for the day they would be challenged by a worthy foe. Or a smaller child with a worse gun. Or if your dad was trying to watch the TV. Any excuse really. Entire wars were fought over ownership of territory in the garden, petty vendettas or simply just to be annoying. A single orange foam pellet was enough to ignite a terrible domestic conflict, only ending with the tired intervention of our poor parents who, in the process of disarming the belligerent parties, raised their voices to the heavens and cried ‘Why?’.

But, children across the world all knew the answer. It’s Nerf or Nuthin’.

Fluffy, animatronic and, most importantly, weird. These are the three key principles that guarantees success in crafting a hit childrens toy in the 90’s. With the promise of having your own strangle little creature to take home, everyone went Furbie crazy.An invasion of the little monsters became inevitable as the 1998 holiday season launched one of the biggest crazes in toys. Slowly but surely, a Furbie would begin to learn to speak basic English as they spent more time with you.Not really, but it was convincing enough to get them banned in several intelligence agencies in the US due to the fear of certain code-words being repeated at a bad time.No, seriously. That happened. 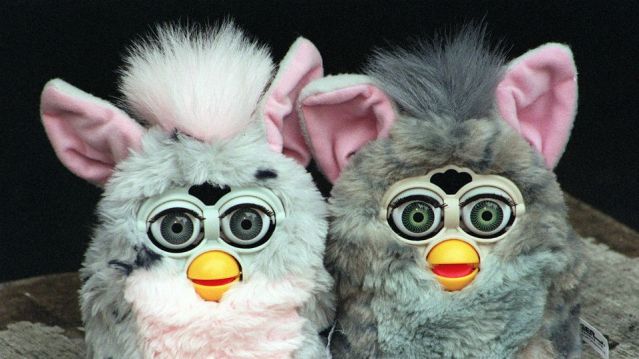 Admit it, you still have at least ten of these still hiding somewhere that you will never throw out.Beanie-mania was a mind-blowing phenomenon, with kids and adults going completely crazy for these
adorable soft toys. With so many varieties of animals to choose from, everyone could find their favorite, stockpiling a nation of Beanie Babies to be the best of the beaniest.
And of course, we can’t forget the Ebay wars. Most of know now that certain Beanie Babies sold for unbelievable amounts of money, leading to a bizarre speculator market of collectors who banked on the value of these children’s toys to pay off in the future. People would travel the world in search for the rarest around, and very few of them were the recommended age for the toy. Who knows, you might have a fortune collecting dust in your attic.

All the responsibilities of a pet without ever having to own one. The Tamagotchi is a wonderful creation, a perfect toy to teach children the value of ownership and caring. And mostly, it was way cheaper and less stressful than getting a dog.

The Tamagotchi is a basic virtual pet simulation, that follows strict cycles of playing, feeding and cleaning a digital companion. The goal is to keep it healthy and happy, but that was usually easier said than done as your pet would often fall sick if overfed, underfed or left without cleaning the screen of droppings. Yes, they even did that. While you may still find one lying around your home today, but given the pets limited lifespan don’t expect to find your lovable digital pal waiting for you. You’d be better off buying a new one to save the
heartache. 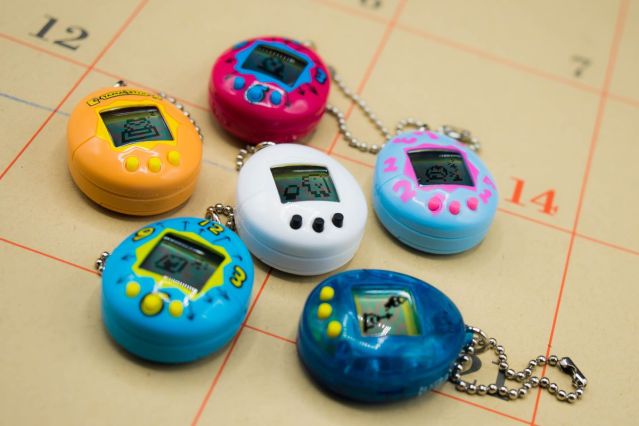 Am I the only one humming the Pokemon theme right now?

The OG of the playground, the sport of champions and a collectors dream. POKÉMON was a pioneering form of children’s entertainment, leveraging children’s love of collecting cute and often rare cards, with the thrill of defeating your friends with the right build.

There were many imitators, but everyone knew there was no substitute. The craze for the cards grew to such an extreme that many of those with the biggest collections had never once actually played the game. There were even some who didn’t realise there was even a game !

The thrill of the draw with buying a randomised pack, the dream of finding the rarest cards around and the achievement of filling out a POKÉMON card binder to show how hardcore you were were all amazing experiences that are hard to replicate.Combined with smash-hit TV shows running during the 90’s and beyond, POKÉMON was everywhere.

And even today, the power of show stands tall with the likes of POKÉMON GO and POKÉMON Detective Pikachu still holding top spots in fan communities worldwide.

So if you’ve felt a nostalgic tingle, why not try and find what classic toys you might have hidden in your house. Or, better yet, check out POKÉMON Detective Pikachu when it arrives on DVD, Blu-rayTM, 3D Blu- rayTM, 4K Ultra HD and 4K Steelbook on 16th September. You can also get it first on digital download on 2nd September.