I have vague memories of watching the original Red Sonja film when I was way to young, I blame it for beginning a life long attraction to warrior women. The character is so iconic and anyone who is a fan of the old swords and sorcery tales will be a fan of her. Coming from a time before civilization Sonja is both mythic and epic in it’s scale, though I cannot deny that some of her previous tales may now be problematic and it is with much enthusiasm that I am happy to let you all know that Eisner Hall-of-Famer Roy Thomas is to release a new Red Sonja Graphic Novel. It is with his writing that I hope that the character will get a much needed 21st century update.

As you can see from the art work, yes they have still kept her skimpy outfit, but for some reason now though it still has it’s sex appeal, the character instead just looks imposing. Maybe I am the wrong person to make this point, as a white male I am limited to my own world experience, but in a strange way maybe having her appear like this is appropriate, after all other similar characters wear just as little, such as Conan the Barbarian and I am sure a few women would consider him sexy. So yes she is not wearing much, but Red Sonja is not drawn as some delicate flower for a man to pick, but instead here she looks like the one doing the picking. Like I said I may be wrong in saying that.

As you can see from the art the book has taken a truly unique look, keeping it Black and White, but using the red to highlight certain areas, which just looks gorgeous. This is all thanks to artists Esteban Moroto (Savage Sword of Conan, Vampirella) and Santi Casas (Batman: Arkham Unhinged). Red Sonja: The Ballad of the Red Goddess will be published as an oversized hardcover in a European format. Never before seen in English, this original graphic novel is an brand new tale

If that’s not enough for you In addition to the standard hardcover edition, a limited signature edition of Red Sonja: The Ballad of the Red Goddess will be available for fans signed by Eisner Hall-of-Fame recipient Roy Thomas! Only 500 copies of this edition will be produced, so reserve your copy ASAP. 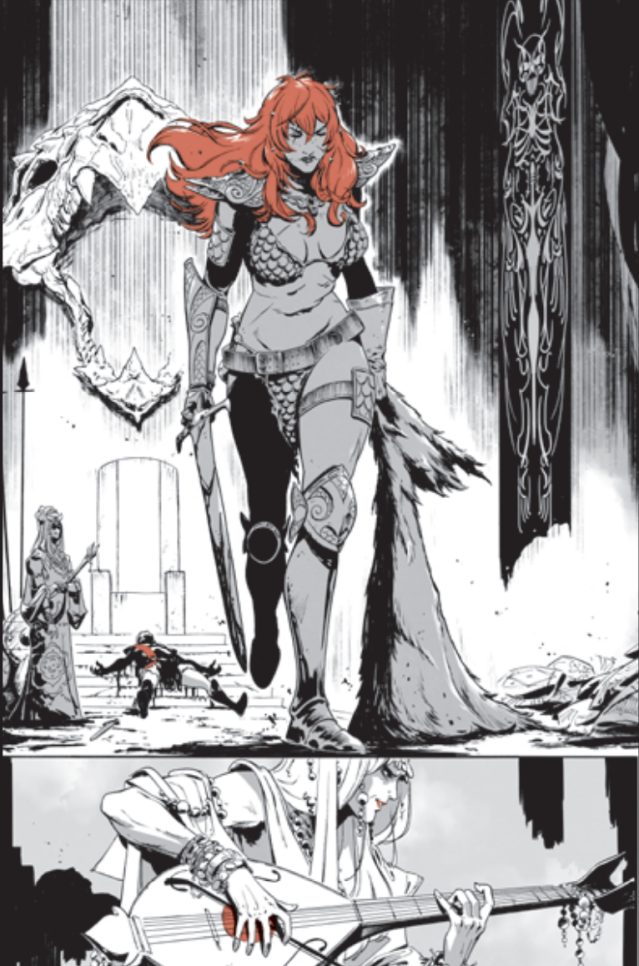