Vikings Season 5 – The Joke – What is Next For Ivar?

From war to internal politics Ivar the Boneless has found success after success. The crippled son of Ragnar has truly risen to lofty heights. In the latest episode ‘The Joke’ we see Ivar finally loose at something maybe his time on top is over? And maybe this is the beginning of his downfall?

I don’t think so… 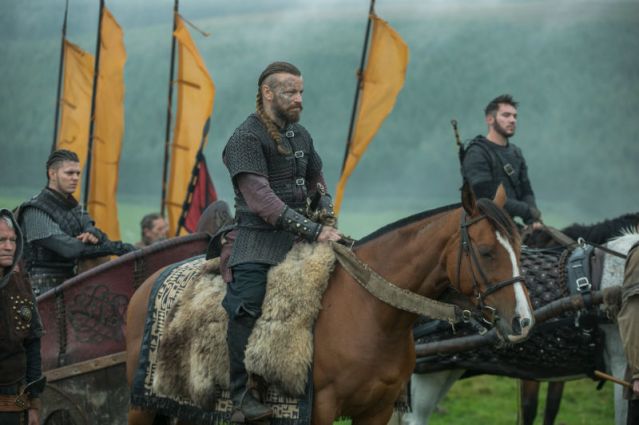 Ivar manage to  convince not only one of his brothers but King Harald and Bishop Headmund to fight a long side him. He has garnered a reputation as a brutal and effective commander, who one should be wary of. Ivar has all the tactical genius of Ragnar but he is genuinely unhinged. It was in Bjorn, his oldest brother, that he may have truly met his match. Bjorn has the fighting prowess and adventurous spirit of their father, but he also like Ivar has his genius, that is what makes Bjorn a truly dangerous opponent. His only weakness is that these wars do not interest him much and he would rather not battle his brothers. Still Bjorn was still able to predict and counter every one of Ivar’s moves a, mostly because Ivar prided himself on being unpredictable, because he was always unpredictable he became predictable.

Though one must wonder did Ivar suspect he was going to loose, is that why he went to protect their ships, taking his loyal warriors in reserve. This meant that Harald sacrificed his troops and in the process his older brother was left humiliated. In the end among his factions leaders Ivar is the only one not to appear foolish.

He manipulated this entire battle, he even lured everyone into thinking he would accept peace terms only in the last minute to turn round and reject any talks of peace. I wonder if Ivar did this so that he is now in a position of strength in his faction. After all his warriors where untouched and he was not defeated.It was Harald who lost, not Ivar. Even if this prediction is wrong it still means that Ivar now knows he can be defeated and will possible be more cautious and cunning in the future, learning to always be unexpected even if that means doing the obvious. Anyway his time is not up yet as Ivar still has to return to York and eventually Ireland to create the Kingdom of Dublin.

Happy new comics day everyone. If you are wanting something a little different from the regular superhero comics that Marvel and DC put out then I'd suggest checking out the new releases by @dynamitecomics
Thus lasted all if five seconds before Jenny stole it from me. If you are a fan of Squid games I highly recommend you check out the range of products from @zavviuk this blanket just happened to he my favourite
I was left incharge of my nephew and this is what happened.
My Tweets