After 19 harassment allegations where made against Andrew Kreisberg production has halted on several Arrowverse show. This situation came to light when Melissa Benoist bravely came forward to condemn Kreisberg, in the statement below. 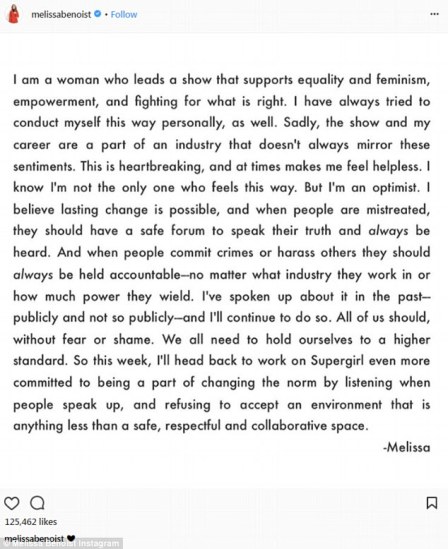 This is a very powerful message and she is right we do all have to hold ourselves to higher standards (not just the people on her show). Since this began Emily Bett Rickards, Caity Lotz  and Chyler Leigh have all contributed to this story, which is fantastic but to be honest its not enough, though its great for women to be speaking out against this kind of deplorable behaviour, its all for nothing if half the industry stays quiet on the topic, which is why I am glad to see Stephen Amell is standing by his colleagues. In a facebook video he had this to say:

“I have no interest in speaking about an ongoing investigation … other than to say WB is conducting an investigation into what is being alleged against one of the producers on our show, and if they need my help in any way, shape or form, they will get it. I thought that it was appropriate before I spoke to you or before I spoke publicly, to speak with our cast and our crew, which I got the chance to do this morning. I certainly can’t pontificate in an eloquent way or in such a succinct manner like Emily did, like Melissa did, like Caity Lotz did. I stand behind and fully support everything that they said. Our biggest asset on Arrow is our crew, and further more, their biggest strength and our biggest strength is working on it as a team. I think that we can do this because we promote and we champion a safe and progressive work environment. I told them this morning, and I tell you now — and I meant it — that if anyone ever feels anything less than 100 percent safe, or anyone feels as through they aren’t allowed to express themselves and be the person that they are, that they should come to whomever they are supposed to go to and that I’ll stand right besides them, right behind them, I’ll speak on their behalf if need be. I also think that in situations like this if you’re not an active part of the solution, then you are a part of the problem. Period. That’s it. We do our best to have the best possible work environment. We will continue to do so. Again, I echo the statements made by my friend and co-worker Emily Bett Rickards, Caity Lotz, Melissa Benoist and the chorus of others that have come forward and called for a safe, progressive, equal working environment.”

Unless both men and women stand together on these issues then there will never be change, yes plenty of men are the cause of these problems, but it is not the gender as a whole, as men we need to come stand by these women not because they are our mothers, sisters, friends and coworkers but because they are our fellow humans. I am well aware that people have different tolerances and some times you have personality clashes or misunderstood humours but when it comes down to it, once someone man or women says they feel uncomfortable in a situation then the person/persons causing the discomfort need to back off and respect the other parties request.

Let us hope that the future will be better.