I was a little bemused when I saw that Deathstroke was to receive his own comic book series. I thought to myself was giving another villain his own comic book series another gimmick? Something to differ DC from Marvel? I have gleefully been proven wrong. Slade Wilson aka Deathstroke aka The Terminator is a real son of a bitch and kind of an asshole, in his history he has done some real dark and evil acts, though they always had reason behind them. The fact that he does not kill for the sake of killing is his most appealing fact, for him its either just business or incredibly personal. He is ruthless and deadly and equal in combat to even Batman, hell at one point he was designed to be an antithesis to Batman (though there have been many). He has had his humanizing moments especially his love for his children but I don’t think anything shows how human he truly is till you see the banter he has with his comrade/ butler/ confident Wintergreen in this book. Maybe that is the secret to why this book is so good, the superhero is the best of what a human can be, they are so good we will never be as good as them, through the villain they represent our faults and the things that set us aside from the heroes and to see one of them just behaving like a complete lad is quite compelling. 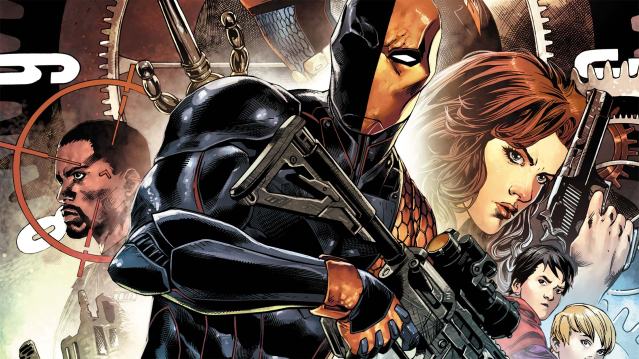 This series is for anyone who likes the concept of the Suicide Squad but hates that they are constrained by the limited morals of those controlling them. Deathstroke is his own man the only man that holds him back his him. This book is going to be one wild ride of a bad man doing some good things and a lot of terrible things, it’s going to be one wild ride and I am seriously looking forward to the next issue. Other plus sides is the return of Slade’s daughter Ravanger she will likely creep up in the book and if you are not a fan of her then me and you and me are going to have problems.

If you know him from his early Teen Titan appearances, or maybe from the Teen Titans cartoon, the Arkham Games or as the utterly ruthless one time ally and full time enemy in the Arrow television series then you’rr going to love this new incarnation of the Deathstroke,  he is flawed but fantastic.

Deathstroke #1 is available to buy from today by clicking here or by visiting your local comic book retailer.