As animated films go this week most people have been concerned with Finding Dory. Now I am sure this will be another success for the Disney and Pixar boys but for me the winner had to be the second official trailer for Illumination Entertainment’s Sing. The film is not an original tale, it follows a theater owner trying to save his business by holding a singing competition, though what makes this unique is the use of animals and the strange meta-commentary about our own society and wanting that brief few seconds of fame up on the stage for the world to see.

I won’t say much about the soundtrack just yet because we don’t have a lot of details on it but the cast looks amazing.

Matthew McConaughey as Buster Moon. You take someone who has gained a name playing sexy and stoic characters and you cast him as an adorable upbeat optimistic koala, bold move but I think it totally works.

Reese Witherspoon as Rosita, again you play against the stereotype here you take the classic beauty of Reese Witherspoon and bank on the fact that she is just incredibly talented and likable, she honestly seems like someone you’d struggle to dislike.

Seth MacFarlane as Mike. the comedy genius himself joins this cast, in what looks like a cross between Brian Griffin, Frank Sinatra and Jerry – the mouse – fantastic casting once again. Seth McFarlane has the Sinatra style voice and impeccable comedy timing and for me this guy is gonna have all the laughs in this movie. Taron Egerton as Johnny, for those who do not know his name you will remember him as Eggsy in The Kingsman. He is playing a Mountain Gorilla who wants to pull away from his fathers criminal lifestyle. Once again a story we have all been told before but not quite like this. 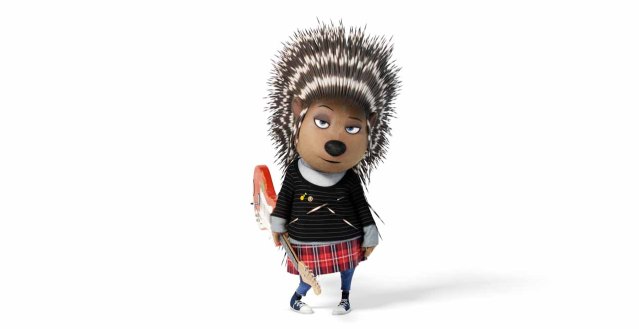 Scarlett Johansson as Ash, a crested porcupine and the alternate rock girl of this group, I wont lie as I am looking forward to seeing her music numbers the most.

Tori Kelly as Meena, a teenage African elephant, Miss Kelly is someone who has not made it big yet but this film may be a good stage to show off her singing chops.

John C. Reilly as Eddie, a black sheep and Buster’s best friend. I am not sure if he will be singing though if you have ever seen Walk Hard you definitely know he can sing and John C Reilly is more talented than most people realize so this is another highlight for me.

Nick Kroll as Bob, a male pig who is Rosita’s sing and dance partner. I couldn’t believe that this was Nick Kroll as I am so used to seeing him play Ruxin in the League where he is an uptight prick but it’s nice to see him play something fun for once.

Nick Offerman as Norman, a pig who is Rosita’s husband. It’s Ron Swanson and I shouldn’t have to tell you anything else.

The film looks like it’s going to be a good family movie with some laughs, maybe a few tears and a life lesson learned. I really am looking forward to it as its’ something that tugs at the nostalgia part of my heart before reality TV moved in and ruined everything. Maybe you love the cast, maybe you miss Glee or maybe you want something that’s fun and you do not need to think about but still has heart, well this looks like it’s going to be the picture for you.