Fox’s latest sitcom follows a group of twentysomethings that move into their first apartment after college and the hijinks that ensue. 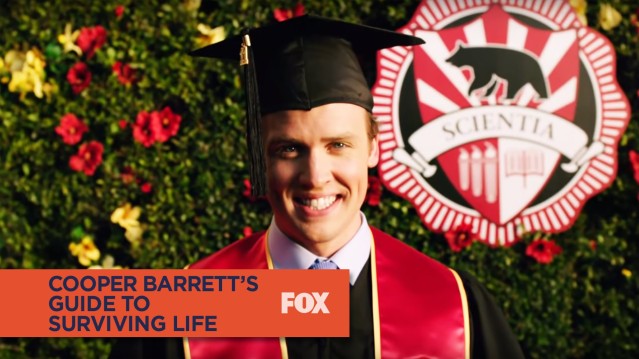 The way in which the first episode of Cooper Barrett’s Guide to Surviving Life was presented was definitely interesting. Instead of the standard sitcom formula they chose to tell the story by jumping through different years. Going from 2015 to 2011 to 2013 to 2015 ran the risk of making the show feel a little disjointed and I was a little sceptical at first. But it actually ended up working really well for the plot and I think the pilot benefited from it overall. It was also nice to see snippets of each character at different stages of their lives and noting the subtle changes (if there were any) in their personas. I really like this setup, in fact I think it was one of the show’s biggest strengths so it’ll be interesting to see if they keep it this way for future episodes.

This episode’s story was titled “How to Survive Your Loveable Jackass” and saw titular character Cooper Barrett, played by newcomer Jack Cutmore-Scott, being kidnapped over the theft of a television. Although the story was funny I can’t help feel it took away from Cooper. It made him completely passive, being the subject of the action rather than instigating it himself. As a lead character surely he should be leading not following? In fact, it seemed as if the pilot belonged to loveable jackass Barry, played by the brilliant James Earl, as it was his quest to find the missing television that drove the episode. That’s not to say that Cutmore-Scott didn’t do a good job, on the contrary he made Cooper charming and very likeable, I just would’ve liked to see a bit more of him.

Talking of people I want to see more of; Liza Lapira was grossly underused in the pilot. Lapira is a fantastic comedy actress and has the ability to bring a lot of energy to this show. Her character Leslie is married to Cooper’s older brother Josh, played by Justin Bartha. Along with James Earl, Justin Bartha was a real standout in this episode. His inner battle between responsible father and man wanting to recapture his youth was great to watch and provided a lot of humour in the pilot. So putting him and Lapira in more scenes together would for sure be comedy gold. Hopefully we’ll get to see this in forthcoming episodes.

The cast is rounded up by Meaghan Rath as Kelly and Charlie Saxton as Neal. Both get adequate screen time in the pilot but not enough for us to really get to know their characters. Kelly is an obvious love interest for Cooper and in an unexpected yet welcomed decision the writers had them kiss in the pilot instead of dragging it out all season long so the foundation is already there for that romance to blossom. 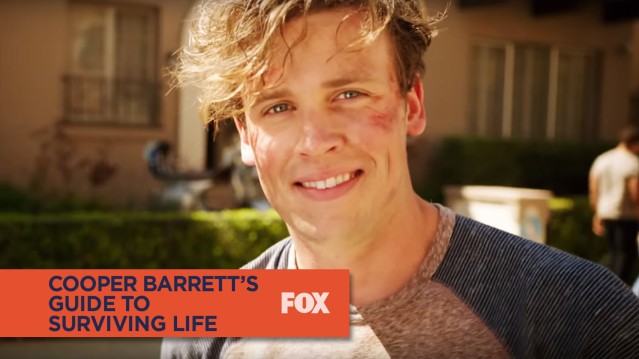 The characters are the real strength in Cooper Barrett’s Guide to Surviving Life. All of them are likeable and their dialogue is sharp and witty. However, it is obvious that Cooper needs more development, something which we need to see in future episodes. If they can do that and maintain the high standard set by key players Bartha and Earl then the show has a real shot at success.