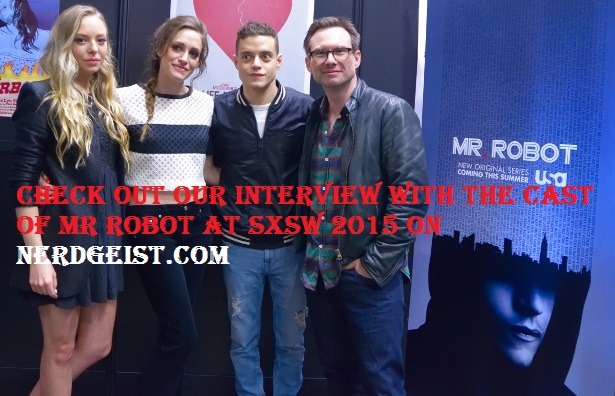 At SXSW 2015 we had the opportunity to interview the cast (Christian Slater, Rami Malek, Carly Chaikin and Portia Doubleday) of upcoming new USA Network series Mr Robot, which airs on 24 June 2015.

MR. ROBOT, premiering on Wednesday 24th June 2015 on USA Network at 10/9c, follows Elliot (Rami Malek, “24”), a young programmer who works as a cyber-security engineer by day and as a vigilante hacker by night.  Elliot finds himself at a crossroads when the mysterious leader (Christian Slater, “Adderall Diaries”) of an underground hacker group recruits him to destroy the firm he is paid to protect.  Compelled by his personal beliefs, Elliot struggles to resist the chance to take down the multinational CEOs he believes are running (and ruining) the world.  The series also stars Portia Doubleday (“Her”), Carly Chaikin (“Suburgatory”) and Martin Wallström (“Simple Simon”). The series starts production this month (April 2015) in New York city.

Can you tell us a little bit about your characters in the TV series Mr. Robot?

Christian Slater: I play a character named Mr.Robot who is a mysterious leader of this F society organisation and I recruit Elliot into it, to help redistribute wealth in America.

Rami Malek: Yeah, help put everybody on the same playing field. I play Elliot who is a brilliant computer hacker but pretty socially inept. I try to use my capabilities to thwart evil and to help out the people I really care about. I do so at night and I’m like a vigilante hacker in the evening.

Rami Malek: It’s mine now, I stole it.

Carly Chaikin: My character’s name is Darlene and she is part of F society, which is an underground hacking world, and a bad ass. She writes the most malicious codes and is pretty much like the ruler of the world. If I do say so myself.

Portia Doubleday: My character’s name is Angela and she works at a cyber security firm called Allsafe as an account executive, she defends her accounts from hackers.

How did you all prepare for these roles?

Christian Slater: How did we all prepare, well things kind of came together quickly but we did work with some hackers. Well maybe not hackers but guys who were particular experts in this field, who knew the lingo and could define most of it. Certainly for me because I was particularly ignorant when it came to this sort of stuff. I needed definitions for it all.

Rami Malek: My character does a lot of drugs, takes a lot of medication and does morphine so I tried morphine and that was interesting.

Christian Slater: A devoted actor, very committed to it.

Rami Malek: Elliot’s a really complicated guy and I tried to put myself in his mind. I used Sam Esmail ,our executive producer, as he has so much knowledge on Elliot and the story as a whole because he created it. I would just pick his brain as much as possible.

Carly Chaikin: I think for me, for the pilot, I just had that one scene but in general for the character I think preparation you do for the character is such tough thing to define necessarily. The way I prepare for any character is to break down the script and who I think they are and create my own character from the text.

Portia Doubleday: I don’t know, I think I’m far more interested in hacking now given that it’s a subject matter that my character is fighting to protect.

Do you find that Mr. Robot is more up to date than other shows based on the topic? No other TV series has actually covered the concept of freedom online, do you find that this gives the series an edge and an advantage?

Carly Chaikin: Totally, I haven’t seen and I mean there haven’t really been any other shows like this. I think that this is a really good depiction of the hacking world. Someone mentioned during the q and a (after the world premiere screening at 2015 SXSW) how he was a computer person and that everyone did a really good job of being real and authentic and sticking to the facts. I think that’s really important to any kind of story.

Rami Malek: Yeah, our show has a very ominous tone to it, you’re very cerebral and you get into the inner workings of how it all goes down. Thereby making it a mysterious and intriguing dark show. One that’s got a thriller aspect to it as well, I think it keeps you hooked and engaged and keeps you wanting more every episode.

Christian Slater: You have a nice heroic vibe to it, you use the hacking techniques you have to help other people that you care about, which is nice. 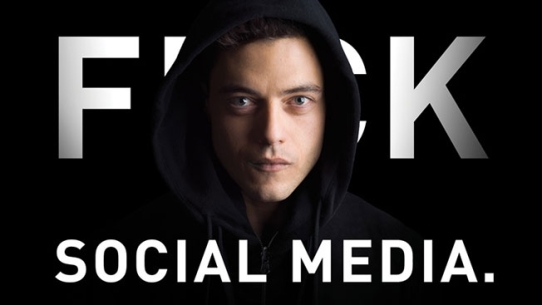 Rami Malek: That’s the truth, I wield my power for good. Truth, liberty and the pursuit of happiness. America.