In the latest installment of the CSI franchise cyber psychologist Avery Ryan and her team of FBI investigators work to solve cyber crimes. Warning there are spoilers ahead.

The CSI franchise is successful worldwide with masses of viewers tuning each week. So CSI: Cyber may already have an advantage on other shows debuting this year. The interesting thing about CSI: Cyber is that it’s not just the same show in a different city. The fact that they focus on cyber crimes is a refreshing spin on the age old formula and is sure to breathe some new life into the franchise. And since here in the real world cyber crimes are on the rise it’s actually quite a fitting theme.

The cast of CSI: Cyber is lead by recent Oscar winner Patricia Arquette who plays the role of team leader Avery Ryan. Arquette is obviously a brilliant actress, and could arguably take on any role and do a good job of it. However whilst she does perform well in the episode, it is almost as if she is being restricted by her own character. By that I mean in the pilot the character of Avery Ryan has a distinct lack of personality, she’s fairly one dimensional and at times comes across as quite robotic. I understand that it is hard to establish and develop a character in the first episode but usually this is a problem for secondary cast, not the lead. Because the lead has so much screen time we normally get to see their quirks and as such connect to them, this didn’t happen in CSI: Cyber. In a way we actually got to see more of the secondary cast’s personality than Arquette’s. However it was in such short supply that it didn’t really have that much of an impact. The exception to all of this was James Van Der Beek who plays Ryan’s second in command Elijah Mundo. He got a lot of screen time and we got to see a lot of his personality, perhaps most prominent his love of video games. The character is written well and Van Der Beek does a great job in it, making him easily the most likeable of the team. 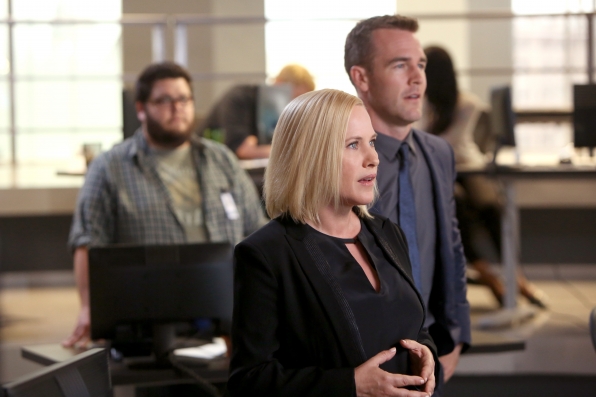 Perhaps the lack of focus on the characters was because the case that they were investigating was so interesting. Here’s where I have to give props to CSI: Cyber. I’ve watched a lot of crime drama pilots this television season and a lot of them have had shaky plots. It’s been blatantly obvious that they’ve just slotted in a crime to fit around establishing the characters. Instead of doing that, CSI: Cyber gave us a very exciting case that we actually cared about. There were some truly great moments to keep us on the edge of our seats; perhaps the most dramatic being a car with a kidnapped baby crashing into a river. That particular scene was definitely gutsy (and brilliant). The plot in this episode was so good that it almost made up for the lack of characterization. What’s clear is that in crime drama pilots it’s very difficult to strike a balance between good plot and good characters. While most choose characters, CSI: Cyber took on plot which might actually be a smarter choice. They have the time to develop characters in upcoming episodes. As long as they do that the show has the potential to be very successful.