Mulaney follows a young comedian who finally lands his dream job but finds that his boss is a nightmare. Warning there may be spoilers ahead.

Created by stand-up comedian and Saturday Night Live veteran John Mulaney, the show offers a different aspect to the usual sitcom format. The show is broken up with scenes of Mulaney doing his stand-up, then quickly switches back to the main storyline. You’d think that this would make the show disjointed but it works surprisingly well. The stand-up scenes are actually the highlight of the episode, Mulaney proving how talented he is in this area. He comes across as natural and personable with his stories and jokes really making the audience laugh.

As natural as he is at stand-up, the scenes where he has to act don’t quite match up. Mulaney spent a lot of time behind the camera on SNL writing the sketches, the transition that he has to make in actually acting them seem to be proving difficult for him. At the start of the episode it feels as if he’s delivering his lines as stand-up, accentuating the punchlines, making the whole thing seem forced. However as the episode progresses he really relaxes into the role, becoming less stiff and more comfortable. If he improves that much in 20 minutes, I have faith that by the end of the season he’ll be much more natural in the acting role. As for the character himself, a fictionalized version of Mulaney, he has that great balance of optimism and sarcasm making him instantly likeable. The fact that his boss is a nightmare only makes you sympathize with the character more.

His nightmare boss Lou Cannon, is played by the hilarious Martin Short. At times it feels like Short is overplaying the role but at the same time it is probably what is required to make the character so funny. Short has a history of playing flamboyant characters and let’s face it, it usually works well for him. You can tell that this part isn’t a stretch for him and as a result he comes across as very believable. Another acting legend Elliot Gould plays Mulaney’s eccentric neighbour Oscar. Gould is seriously underused in the pilot, only been seen towards the end of the episode. I hope he has more screen time in forthcoming episodes otherwise it’s just such a waste of his talents. 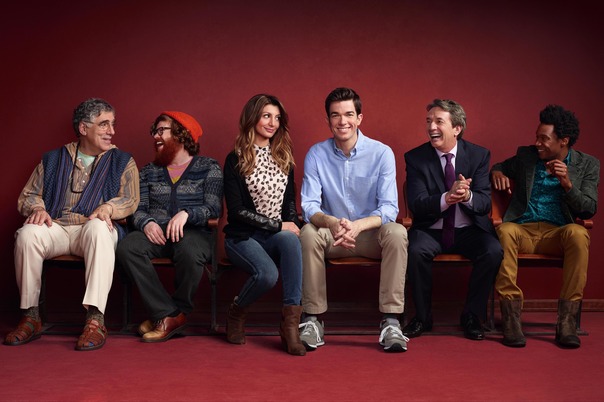 Mulaney’s roommates are Motif and Jane, played by Seaton Smith and Nasim Pedrad respectively. Smith, a relative newcomer, probably lands the funniest jokes with the least effort. The whole “Problem Bitch” concept was very entertaining and I have a feeling he will be the breakout star of the show. However the real standout of the pilot was Pedrad who has already shown her comedic range on SNL. Never quite getting the recognition she deserved on SNL, I’m hoping that this show will be where she can shine and finally get the accolades due to her. Her character Jane is completely obsessive and crazy, but at the same time still very likeable. She says and does things that most people would never have the guts to do. Her antics, especially regarding her ex-boyfriend, are hilarious to watch and Pedrad performs strongly as expected. As great as her insanity is, I’m hoping we’ll get to see more layers to her character as the psycho ex girlfriend can only be funny for so long. 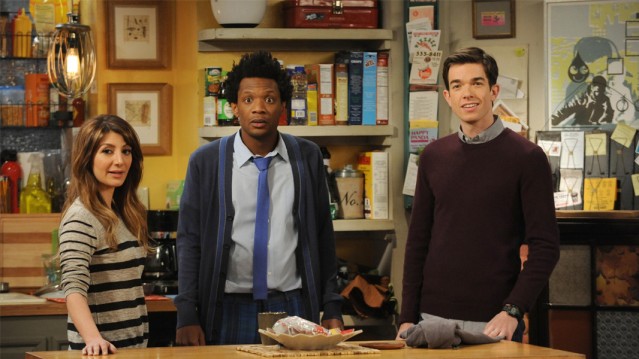 Rounding off the show is Andre, played by Zack Pearlman. Andre is that typical weird character that nobody likes and serves no real purpose on the show. His character is probably the biggest thing that didn’t work for the pilot. It’s not because he was incredibly unlikeable, in fact the issue was that I felt completely indifferent to him. I felt that nobody would’ve noticed had he been erased from the episode. Now this may not be Pearlman’s fault, to be honest it would’ve been hard to make a mark with the poor material he was given but that doesn’t solve the problem. Either the writers need to do better with his character or cut him loose.

Mulaney is a show with great potential. Full of talented comics the jokes are hilarious and the stand-up even better. I think the thing that will determine the show’s success is John Mulaney himself. His writing his pretty solid but as I’ve said before he needs to tighten up his acting. That being said I really enjoyed the pilot and look forward to upcoming episodes.

What where your thoughts on the newest episode of Falcon and The Winter Soldier?
Back in 1997 I was so addicted to the original and I am kind of excited to see this remake.
It looks like @cbstv may have made a miscalculation cancelling @macgyvercbs because the fans are out in force looking to save the show. For more information and a chance to see our interview with @lucastill check the link in our bio. Or just head to Nerdgeist.com