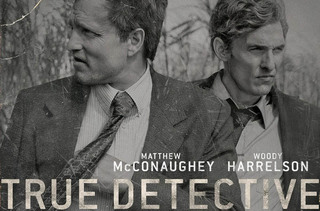 This one’s another HBO cop show and if you thought the Wire was gritty,  man this one may be a little bit more than your bargained for. Set in beautiful Louisiana this series jumps between 1995 and 2012, Detectives Martin Hart (Woody Harrelson) and Rustin “Rust” Cohle (Matthew McConaughey) have caught a rather grizzly case involving the ritualistic murder of a young women that really isn’t for the faint hearted. We are told the story separately through flash backs, from each of the main characters points of view, they themselves are being interviewed about the case 17years after it occurred.  This is defiantly a character driven show, that will follow an anthology format with each season being about a different event, the show will defiantly have a lot of potential.

I wont lie the investigation into the murder isn’t even the drawing point of the series, infact I found it rather slow paced, which probably adds to the realism of the series, the main draw is our lead detectives who are superbly cast. Harrelson is one of my all time favorite comedy actors and more and more recently he has been going into serious parts and playing them superbly well, while on the other hand you have McConaughey who ever since Killer Joe has been on a real hot streak of great roles much deserved to an incredibly under rated actor. Harrelson as the warm hearted family man, is very conscious of his effect on people and genuanly a good man, an optimist, while McConaughey, who is barely recognizable in the series, is cold calculated and a self confessed pessimist.

Rounding out the cast is a host of other great actors, Kevin Dunn, who many will know as the father from Transformers, but few will remember from short lived series Luck, trust me is a lot better in Luck, Lili Simmons, many will know her from Banshee, as the Antagonist’s niece and Clarke Peters, if you have seen the Wire you will remember him as detective Lester Freamon, there is a lot to see and the cast really is terrific.

As I have already stated its slow paced but its building up momentum and I have no doubt that this will be one of 2014’s hottest shows.