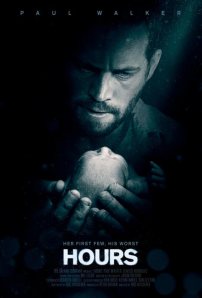 At first I wasn’t sure if I wanted to watch this as I thought it would be truly depressing especially with the tragic passing of Paul Walker last year. However after watching the trailer and hearing about the rave reviews he was getting for his performance, I decided to give it a go. It’s haunting at first knowing in the back of your mind when you first watch it that he is a father with his own daughter in reality and that this was the final complete film he ever made.

In the trailer from the moment he shouts’ Tell me she’s fine, tell me she’s fine’ after being told that his wife passed away, he’s holding on hope that his new-born daughter is ok. When everyone is evacuated due to Hurricane Katrina, Nolan (Paul) is left alone with his daughter. The ventilator being used to keep her alive since she was born 5 weeks premature eventually runs low on battery. Now Nolan can only keep her alive by manually winding up a back-up battery that only can provide 3 minutes of charge.

When he’s with his baby daughter trying desperately to keep his daughter alive, it really pulls at your heartstrings.  Only a father can truly understand the real pain he’s in. He’s winding up to charge the battery to the point his hand suffers from bleeding cuts.

Paul Walker definitely gives one of his finest performances in his entire acting career in this film. Sometimes I doubt he was acting but showing real raw emotion and pain that he would feel from being a real life father. I highly recommend you to watch this film with a box of tissues at the ready and some comfort food such as ice cream.  It may make you cry but it’s a great movie none the less.