Avalon…… to be a spy in king Arthurs Court!

In a previous article we spoke about Resistance, the fun and paranoia inducing party game. This time I wanted to talk about a similar game produced by the creators of resistance, Avalon. Now I’m going to take a step back here and drop a knowledge bomb. Avalon is the place where King Arthur is taken after fighting Mordred at the Battle of Camlann to recover from his wounds. Legend claimed that Arthur had never really died, but would return to lead his people against their enemies. The Historia also states that Avalon is where his Excalibur was forged. So in Arthurian Legend it’s a pretty important place. 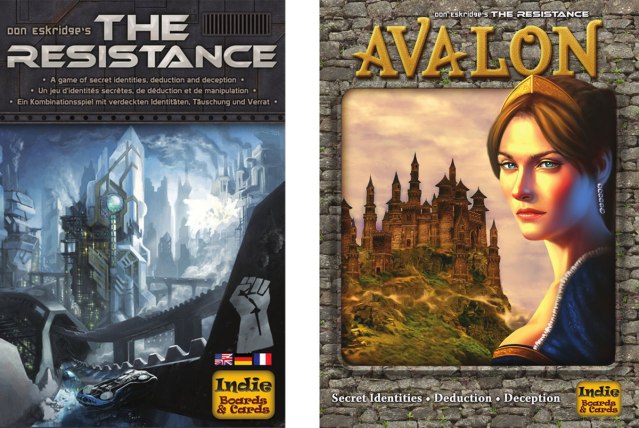 Now as much as I enjoy a nice history/mythology/fantasy lesson, there is a reason why I am telling you this. The game Avalon plays exactly like resistance with players secretly voting to overturn decisions made by the group trust me it’s a lot more fun than it sounds. So as the game begins everyone is given a card that tells them what faction they are in, either the minions of Mordred or Arthurs Court, the Minions all know who they are and will spend the rest of the game trying to outsmart and confuse the Court of Arthur. Yes at this point it’s exactly the same as Resistance, but there is a key difference, in Avalon there are character cards, each character has a special ability that benefits his or her own faction, Mordreds faction has more special characters but that’s because they have less players, this helps balance the power.

The Characters are as follows:

Special ability: Can see all Minions of Mordred

So at the start of the game Merlin see’s all players classified as Minions of Mordred, this is a very powerful ability but there is one major catch, if the opposing faction can figure out who Merlin is at the end of the game they can kill him and win the game, so his power is a double edged sword.

Background – Merlin is a legendary figure best known as the druid or wizard featured in the Arthurian legend. The standard depiction of the character first appears in Geoffrey of Monmouth’s Historia Regum Britanniae, written c. 1136, and is based on an amalgamation of previous historical and legendary figures.

Special Ability-Can see who Merlin is

After Merlin see’s all the Minions of Mordred, Percy here has the chance to see Merlin, but once again this is a double edged sword for 2 reasons.

1 – If he gives too much away Merlin might be discovered

2 – Morgan Le Fay can and will Pretend to be Merlin during the unveiling round so Perivale will have to be careful.

Background – In the earliest story about him he is connected to the grail. In Chrétien de Troyes’ Perceval, the Story of the Grail, he meets the crippled Fisher King and sees a grail, not yet identified as “holy”, but he fails to ask a question that would have healed the injured king. Upon learning of his mistake he vows to find the Grail castle again and fulfil his quest but Chretien’s story breaks off soon after, to be continued in a number of different ways by various authors.

This lovely young ladies job is to kill Merlin, you must spend the game watching everyone, its actually quite easy, in the end you have at most a 1 in 6 chance to guess who it is, victory rests in your shoulders but it’s a fun role to play.

Special ability – When Percival is in play he can see who plays as Merlin, Morgan will also appear at this point and pretend to be Merlin as well. This really can mess up the Courts chance of winning, if played properly.

Background – Morgan Le Fay: popularly known as Arthurian sorceress, benevolent fairy, priestess, dark magician, enchantress, witch, sea goddess, shape-changer, healer, and the sole personage of Avalon the Isle of Apples, not to mention daughter of Ygerna (Igraine) and Gorlois, half-sister to King Arthur, mother of Mordred, lady-in-waiting to Guinevere, wife of Uriens, lover of Sir Accolon, fancier of Sir Lancelot, and ‘as fair a lady as any might be’. In this she is portrayed as the ageless mother of Morded and one of his most devout followers.

Special Ability – Mordred is unseen to Merlin, when the game begins only his minions may view him; this gives evil a much needed ace in the hole against Merlins knowledge.

Background – Mordred is a character in the Arthurian legend, known as a notorious traitor who fought King Arthur at the Battle of Camlann, where he was killed and Arthur fatally wounded. Tradition varies on his relationship to Arthur.

Special Ability – This one is one of my favourite cards in the game as he is a complete wild card, no one knows who he is and is there to just be mischievous.

Background – Oberon (also spelled Auberon) is a king of the fairies in medieval and Renaissance literature. He is best known as a character in William Shakespeare’s play, A Midsummer Night’s Dream, in which he is Consort to Titania, Queen of the Fairies. 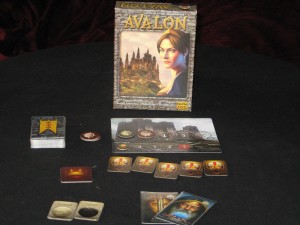 So we hve a card game that will split friends but it will be good fun rounded out with some very nice art work, this one is a game I advise everyone to pick up and play.