Dynamite: Elvira Mistress of the Dark “The Classic Years Vol 1”

Ok this one was such an absolute treat to read. Elvira Mistress of the Dark “The Classic Years Vol 1” is a reprint of some of her most popular comics from when she was with Claypool Comics. Back then it was Paul Dini who was writing for the comic, yes the Paul Dini who would later go on to work on Harley Quinn, Batman, Zatanna, and the very underrated Tv series Freakazoid (among other things). What I am trying to say is, this guy is an epic talent and a huge deal, so the fact that he worked on this is a great sign that Elvira Mistress of the Dark “The Classic Years Vol 1” is really worth the read. And yes dear readers, this one does live up to the hype. 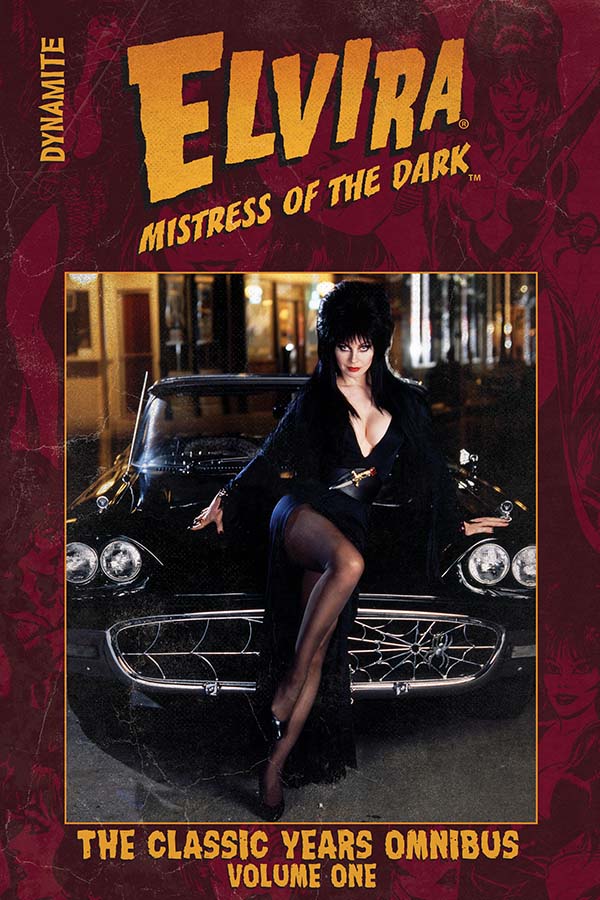 If you have never heard of Elvira then I will try and explain, though it is difficult as I sadly never saw her original show. But Elvira Mistress of the Dark is the alternate persona of Cassandra Peterson. Cassandra would host Elvira’s Movie Macabre, this was a hosted horror movie television program that originally aired from 1981 to 1986. Similar to Mystery Science Theater 3000 the show featured B movies, such as horror and some science fiction, and is hosted by Elvira, who is Cassandra – in a low-cut dress, tights, and a very distinctive heaven bump hairstyle. The show was famous for Elvira occasionally interrupting the films with sharp comments and jokes.

Elvira went from cult following to mainstream success and has never really left the zeitgeist. This is why there has been so much merchandise made for her, including several comic book series. The issues enclosed in this collection are from her 1990’s run and they hold up with the more modern ones that I am familiar with.

The stories are quite random and see the Mistress of the Dark go up against killer clowns, werewolves, gypsy curses, and phantoms. Each issue is also peppered with the usual energy that we can expect from all things Elvira and when I say this I generally mean there is nothing quite like this woman.

Now before you all jump in head first to this book I will warn you that it is all Black and White art. Before you switch off I should say that the lack of color does not take away from the art, in fact, I think it kind of adds to it. Especially with the “gothy” tones that the book chooses to give us. So if you are a tad hesitant about reading a black and white book just take my advice and give it a read. You will love it.

Another fantastic read and one worth the time, so if you are interested in this one then grab yourself a copy as it is on sale from today.