Marvel Phase 4 – Could Miles Morales Be Next?

A quick TLDR on Miles Morales. Miles is the second Spider-Man, in universe he takes over the role after Peter is killed. Being bitten by a slightly different genetically engineered spider than the one that granted Peter Parker superhuman powers. Miles Morales possesses abilities similar to the original Spider-Man’s, including enhanced strength and agility, the ability to stick to walls with his hands and feet, and a “spider sense” that warns him of danger with a buzzing sensation in his head. Though his strength and agility are similar to those of the original Spider-Man, his spider-sense is not as strong, as it only warns him of immediate danger.

He has two abilities that the original Spider-Man does not have: the ability to camouflage himself, including his clothing, to match his surroundings, making him effectively invisible and a “venom strike” that can temporarily paralyze practically anyone with just a touch. It can break chains being used to restrain Miles and even repel non-ferrous objects, such as plastic Lego bricks. The venom strike is powerful enough to render unconscious a person as large as Hank Pym’s Giant-Man. It is powerful enough to drive away the symbiotic villain Venom during Miles’ first encounter with the creature. 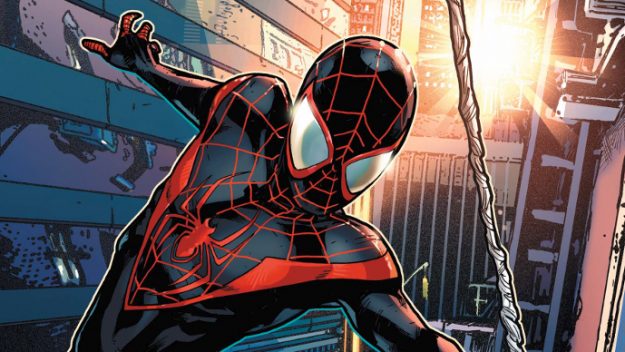 We already know that he exists because we have met his uncle in Spider-Man homecoming. If you remember in that film Donald Glover ha s a brief cameo, well that was Mile’s uncle, he even mentions having a nephew in the film.

If Miles did not vanish with the Snap then he would be 15 or 16 by the start of the latest Spider-Man film and put him in the right age group. He could easily fit in, like how he was idea in the Spider-Man PS4 game where he becomes an acquaintance then almost apprentice to Peter. Even if they had him vanish with the snap he could appear later in Tom Hollands run as Spider-Man and maybe give him a chance to retire. This would allow Spider-Man to outlive Tom Holland and help the MCU grow past phase 6 – if it gets there.