Trini and Jason are lost on a strange alien world, one of billions, with little to hope of being found the two take a proactive stance and fight to survive and be heard in this big bad universe. All the while Jason thinks back to his childhood and how he began to learn martial arts. Our two intrepid heroes are forced to reply on each other and get in each others heads, in more ways that one, with their powers swapped and help trillions of miles away they will need each other more than ever.

Meanwhile back on Earth the rest of the team are struggling to fill the spots for their teammates while still being the planets best and last line of defense. Billy steps into the support role to help find his friends while Zack and Kim hold the line. They all know that the clock is ticking sooner or later they will need the Megazord and if it’s not there then they are royally screwed. 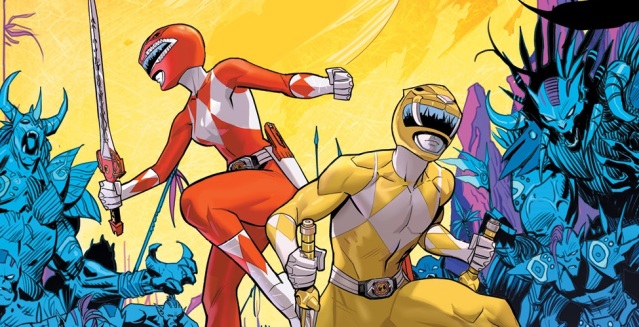 Our heroes do not know it yet but they are in luck. Rita is also off planet and with her away her forces are less likely to attack, but we have yet to find out what she is up too. So far we know she is on a world that she “Liberated” one that lives by survival of the fittest and did I mention it’s the same world the Red and Yellow Ranger are stranded on.

Finally Rita’s minions have been left alone and when mum’s away I guess the kids can play. An unlikely voice of dissent has begun to rumble and I am curious to see what his plans are…

This arc looks like it is going to have some interesting twists and turns though I am still wondering how will the series go when the Green Ranger appears, I guess only time will tell.