Should We Be Angry At Scarlett Johnansson ?

First off, I want to make myself clear and explain that I am not endorsing white washing or trans phobic behavior, I think that both are completely abhorrent and should never happen, the that such things still happen is utterly heart breaking. Saying all this I am writing from the perspective of a heterosexual white male, whose opinions continue to evolve and change, god knows I am not the same person I was ten or twenty years ago, so if you read what I have to say and wholeheartedly disagree with me, then by all means do, talk to me like a human and tell me why you think I am wrong and we can have a discussion. Saying all that I am about to dive into a minefield of issues, ones that I am probably not smart enough to deal with, but hey if our elected officials think they can, why can’t I?

So what has Scarlett done that is so bad?

Let’s go with White Washing first, because that’s an easy topic with practically no nuances in it(SARCASM).

I think we can all agree that White Washing is wrong. I really want to say you should cast based on ethnicity, but somehow, I worry that may also be wrong, talent should always be the decisive factor while getting someone of the correct ethnicity is just as important, but of course there can be exceptions. Hamilton famously casts based on talent instead of skin tone, though in it’s case the show is making a statement about race, The Cursed Child cast Hermione Granger as someone of African descent, in that case J K Rowling stated that she never explicitly said that the character was white and finally the live action Attack on Titan movie where the entire cast was Japanese and not Caucasian, which is incorrect but then again it was a film made entirely in Japan so I am not judging.

The point I am trying to make is that context is everything.

In Ghost In The Shell she played the role of The Major. The Major is a cybernetic cop who is a total badass but at the same time knows absolutely nothing about her past. Before massive continuity shifts the audience was left unsure if she was human let alone female, which really helped define the character.

So why am I telling you this? 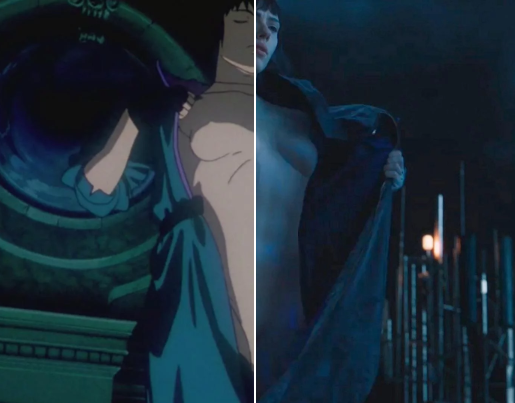 Honestly, I would have preferred they got Rila Fukushima for the role (below), as she would have been perfect, but taking all this into consideration you have to wonder, does race really matter for a character who is not even human?

In her next role the actress, who I think we can all agree is incredibly talented is playing a Transgender male and before I get into this I find it highly disturbing that any articles I read up on this historical character tend to refer them as a woman dressed as a man, which is disgusting. You should only be identified as the gender that you yourself identify as, that is a basic human right!

So these articles tend to disgust me.

I am well aware that gender and sex are two separate things, sex would refer to what you are on a genetic level and sex is what you identify as, neither of which is a choice, this is just how you were born.

The role she is cast in is that of Dante “Tex” Gill, Gill ran several massage parlous that where actually fronts for brothels, a truly fascinating character that defiantly warrants a film. So, a lot of people are angry that a Cis Female has been cast in the role of a Trans man. Part of me can see why the outrage is there, I honestly am not familiar enough with trans life and that is probably the problem, because it is not just me, its far to many people who need to become more familiar.

So Scarlet is the right sex but a lot of people feel that she lacks the knowledge and nuances to play the gender.

I know this leads people to ask, if a straight man can play a gay man and vice versa, is this not the same?

I know this because this is how I felt and in theory yes it is the same, but maybe not in practice.

is it not an actors job to become someone else even if that person is of different gender?

Still when it comes down to it Dante’s sex was female and his gender identity was male, so can Scarlett play the role, well yes, is she the right person for it no.

But will she do the role justice yes, honestly I think she will.

This will continue to be a problem until we get more Trans actors but with the American cinema only turning out massive Blockbusters and Oscar bate or small Indie pics there really is no space for something in the middle. Still I feel I am in two minds:

I guess the truth is somewhere between both those statements and hopefully we can find it soon.

In the end like I said earlier I am a straight white male and my knowledge on such things will always be limited, maybe this will make me unqualified and maybe my opinion is not valid I just hope I have not offended anyone and maybe I have gave you all something to think about.

I still think that we need more representation in the mass media, not just people who identify as Trans, but other members of the LGBTQ+ community and of course people of color too, we are making strides in the right direction, just sadly not quick enough.

Also in answer to the original question for taking these roles No we should not be angry at Scarlett, for her Twitter response, maybe…