Be Shuri Not To Miss Letitia Wright At MCM London

First off I am refusing to apologies for the Shuri Pun, because I love puns and secondly MCM London is really pulling out all the stops with their latest guest. Some how they have managed to get Letitia Wright. If for some reason you have missed Black Panther then know this Letita’s portrayal of Shuri, Princess of Wakanda has been met with universal acclaim, Shuri of course is currently the smartest person in the MCU and kind of a badass in her own right. Letitia is truly a rising star and many of us are already fans so if your heading to MCM London she will be there on the Friday and Saturday. And if you are wondering how popular she is then check out some of our favorite Shuri meme’s below: 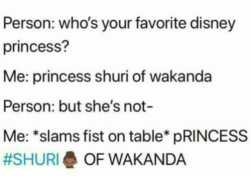