Is Vikings going to kill Lagertha off

In my opinion Lagertha is probably the most underrated character in Vikings, she is the one that has truly made the rise to power. Yes Ragnar was the first to rise to great heights but she is the one that has continually clawed her way to the top. Though at this point one must wonder what is her motivation? I think there is always going to be part of her that would rather have stayed the wife of a clever farmer, with a son and daughter, a simple quiet life. I feel that her continual push for power and security is two fold:

As much as I love her character, because she truly is the underdog, I must wonder is she going to be killed off soon. With two of Ragnars sons looking to ally with King Harald and Floki making his own plots Lagertha is going to have an uphill battle. To her credit she has always faced mightier foes and through cunning has come out on top. The only problem here is that both Harald and Ivar are very wise enemies and will be difficult to overcome in both conventional and unconventional warfare.

There will be five factors that could work in her favor:

One key ally she does have is Raganr’s second oldest son, which may make some soldiers side with her, who would not have originally. Lagertha is well dug in, she has fortified her city and is always fighting on the loosing side, her enemies will underestimate her, if one or more of the factors listed come to pass she may just win. If not her death would spurn Bjorn to return to Norway and seek vengeance against his once former allies. Though I do not want her to die, I can’t help but feel her arc is up. 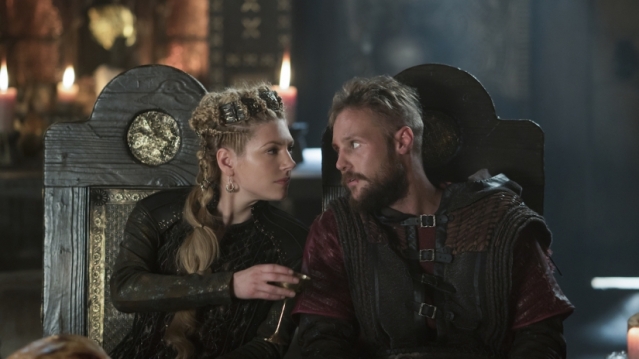