I’ll be the first to admit that, before I had the pleasure of reading this latest issue of ‘Midnighter’, I knew very little about Lucas Trent and his, aforementioned, alter ego.  I didn’t know that his origins actually lie in Wildstorm comics. I was ignorant to the fact that he had been heralded as ‘the greatest tactician in the history of mankind’ and I was blissfully unaware that he is capable of giving, even the formidable Martian Manhunter, a nose bleed. By all accounts, he was hardly a blip on my DC radar. However, after reading this issue, ‘Midnighter’ has steamrolled his way, in my estimation, from mere blip, straight through to full blown bat-signal.

Warning: There may be possible spoilers ahead. 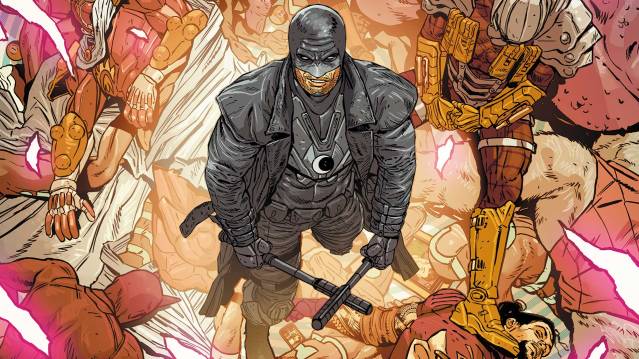 As mentioned, ‘Midnighter’s’ origins lie in Wildstorm comics. He was created as Wildstorms answer to Batman, though given his tendency towards the more ‘final’ forms of violence, I’m sure Batman would have a lot to say about that. He was the result of a secret experimental academy, specialising in the creation of enhanced humans. This department was headed by ‘The Gardener’ and the, presumed dead, Henry Bendix a character who (*spoiler alert*) has a big part to play in this issue and the full story arc. He has been in an on-off relationship (throughout many the timeline) with fellow ‘Gardener’ experiment Apollo, making them, arguably, one of the most renowned and respected gay couples in comic-book history.

However, for those that know this character, his main calling card is actually, well, his calling-card… ‘Midnighter’ has many abilities (such as dodging a bullet at point blank range) but his trump card is his ability to predict every outcome of any situation, as well as the abilities of any opponent. As a result of such an advantage, ‘Midnighter’ thought it only fair to create a business card outlining this ability which he hands out to those, he feels, deserve a heads-up.

In this issue, and story-arc, these attributes, relationships and, a large dash of downright awesomeness, come into play. This arc manages to call-in a wealth of DC heavyweights including Task Force X (aka The Suicide Squad), the prolific Amanda Waller and the elusive Spyral. Despite this illustrious company, ‘Midnigher’ manages to hold his own and is the outright anti(hero) of this tale.

Steve Orlando has done a stellar job in making this character an impossible combination of both likeable and unlikeable at once. ‘Midnighter’ is arrogant to a level that even Dick Grayson can’t aspire to, but it is this confidence that really makes him standout and is undoubtedly what has seen him through a number of impossible situations, including one in this issue. Orlando also pays a great tribute to some of the better known characters, such as Amanda Waller and Deadshot and manages to seamlessly weave them into ‘Midnighter’s’ world, allowing them to merely support but not overshadow his title character.

The art-work, by ACO, is probably some of the most detailed, and violent, in the DCU at present, and you really can’t ask for more than that in a comic! Each panel is filled to the brim with intrigue alongside a good serving of blood and gore, which makes the reading as cinematic and immersive as possible.

To sum up, as I admitted at the start of this review, I didn’t know much about this character. To me, ‘Midnighter’ was the answer to a lesser known pub quiz question, a poor-man’s Batman and a token character to meet the ‘diversity’ agenda and quota. However, upon finishing this issue of ‘Midnighter’, my first action was to browse the inter-web for all back issues as well as to brush up my woeful knowledge and opinion of this character. In all, ‘Midnighter’ # 12 is an all round triumph and now all that’s left for me to do is to pitch a tent at my letter-box and wait these other issues to arrive.

Midnighter #12 is available to buy from today by clicking here or by visiting your local comic book retailer.