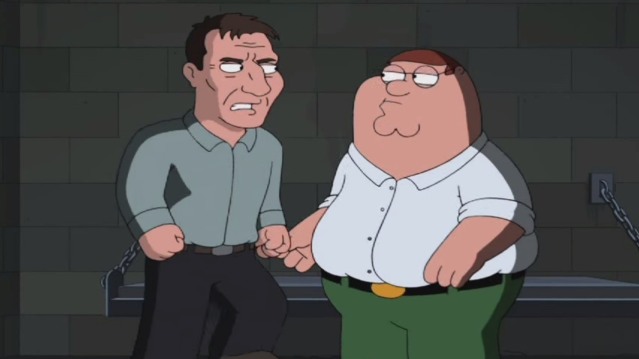 I’m really never one to review single episodes of TV but every now and again something happens that just catches my eyes and entertains me. Family Guys latest offering ‘The Fighting Irish’ is one of those rare events. In this particular episode Peter drunkenly claims repeatedly that Liam Neeson is not a real tough guy and that he could easily beat him up. 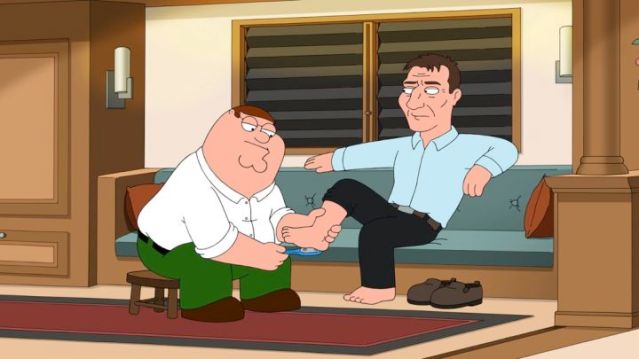 We all have friends who make the most absurd drunken claims, in the case of Quagmire, Joe and Cleveland they are just sick of Peter’s crap and convince him to either admit he is wrong or fight Liam Neeson.

After some mishaps Peter finally gets his chance and backs out, come on, seriously who would fight Neeson?

In the end Liam Turns Peter into his big fat house boy, for a while Peter is happy to comply but after he is humiliated in front of his friends he snaps and he goes for it.

From past experiences we know that Peter can fight, taking on his arch nemesis and even Homer Simpson but this time around he is going up against a man with a particular set of skills and Peter just can’t keep up with him.

Last weekend we had the Mayweather vs Pacquiao fight and as entertaining as that fight was, it was nothing compared to this one. The main plot line was just hilarious with Neeson poking fun of himself and the roles he has played, even making a reference to the Battle of the Boyne. All round this has to be one of Family Guy’s best episodes, even if its sub plot was a little weak, ironically enough the episode pokes fun at that too. So if you’re a long time fan of Family guy or maybe you used to a fan but fell out of favour with the show, give this episode a watch and you won’t be disappointed.

Getting to kick the holiday season off with this gem was worth it. If you are looking a few random tunes, the Guardians of the Galaxy, hijinks and Kevin Bacon this is definitely the one for you.
@julz.maru see this is why I took my glasses off !
This has to be one of the most powerful documentaries I have seen in a long time. Hong Kong: City on Fire tells the story of protestors fighting for their rights against the CCP.
My Tweets