So I was watching one of my favourite TV programmes, The Mindy Project, last week and began to wonder why I loved the lead character (portrayed by Mindy Kaling) so much. Something you should know first of all is lead characters are never my favourite. Harry Potter, Buffy, Sydney Bristow– they never really appealed to me. I think leads are particularly difficult to write for; they have the most screen time and have to carry a show. They often don’t get the comedic scenes like Ron Weasley or get to be a sociopathic, if not adorable genius like Topher Brink. So it’s tough. And yet here I am watching a show that has me hooked because of how awesome I think the lead character is. Why? She’s not a badass, she’s not heroic and she’s certainly not self sacrificing. And that, I realise, is why I love her. She is in fact kinda self obsessed, she makes a ton of bad choices and at times she’s a complete emotional wreck. In the pilot she’s get so wasted that she rides a bicycle into a pool and ends up getting arrested. She is completely flawed.

Often people’s favourite characters in a TV series aren’t the perfect do gooders, they’re the antiheroes or the villains or the goofy sidekick. The characters that can say or do awful and stupid things but have these redeemable qualities that make us stick by them. So this got me thinking, why do we love these flawed characters so much? And I think I have the answer. It’s because they’re exactly like us. They make mistakes just like us. They have bad qualities just like us. They’re not perfect, and let’s face it in reality no one is. They are completely relatable. They remind us of our own family members or our friends. We can imagine ourselves hanging out with these characters if they were real. I personally would love to grab cocktails with Mindy.

And so, I decided to create a list of my favourite flawed characters in TV (and one web series).  Warning, there are spoilers ahead.

While Caroline and Max are very different, they both have flaws that make them worthy of this list so I decided to include them both. Caroline starts off as an over privileged girl who has no idea what life is like when you aren’t rich. Part of the hilarity of the show comes from watching her transition from this spoilt little rich girl to a hard working mature adult. However it is clear that money is always on her mind and she still detests her current lifestyle. Max is the polar opposite. She is cynical and sarcastic, often greeting customers at the diner with an insult. It is often noted that she puts an emotional guard up because of her troubled past. While some get offended by her sassy attitude, to others it is what makes her so likeable. Despite these girls being so different they can both openly admit they’re selfish, which I love.

Most Flawed moment– Caroline uses Max as human shield when a gunman comes into the diner.

Neptune’s resident bad boy, Logan Echolls entertained us for 3 seasons with his devilish charm and wild, if not sometimes immoral antics. At the start of the show he was portrayed as the antagonist, a sparring partner for our heroine Veronica. He was rich, popular and kind of an ass. The typical high school bully. And yet beneath that was a caring, intelligent man who was fiercely protective of those around him. This last trait tended to get him into a lot of fights, particularly where Veronica was concerned. While Logan had matured significantly in the movie he still manages to lose his cool and pummel a few guys. Well, as they say old habits die hard.

Most flawed moment- Attacking Piz after (wrongly) assuming that he had leaked a racy video of him and Veronica. Did I mention the guy might have some anger issues?

Neurotic. Awkward. Overanxious. Obsessive. All words I would use to describe Codex/Cyd from The Guild. And yet she is probably the most loveable character on the show. The Guild begins with Codex living a fairly reclusive life after losing her job. Her therapist has refused to see her again and her addiction to gaming has gotten out of hand. However all of these supposed flaws make her more endearing and you end up really rooting for her. As the show progresses Codex develops more confidence and is able to stand up for herself. Although true to character, she is still prone to freak outs- as we all are.

Most flawed moment– Too scared to tell her guild that she had a one night stand with Fawkes (the leader of a rival guild), she lies and says they are dating. 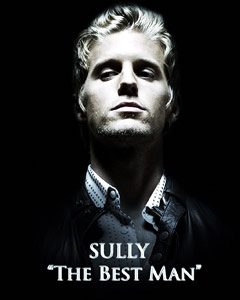 Typical frat boy. Sully loves drinking, parties and girls, lots of girls. He is not dissimilar to fellow flawed list member Logan Echolls. At the start of the show you wonder whether he’s attending the wedding to support his best friend or just there to check out the bridesmaids. A complete player, he immediately makes a beeline for Chloe, knowing that her boyfriend is also attending the wedding. Whilst Sully does sound like a grade A douche bag, you get the feeling that his flawed personality is just a result of his immaturity and naivety.  During the course of the show he is forced to grow up very quickly (he is stuck on an island with a murderer) and develops into a truly heroic character. However his naivety proves to be a fatal flaw, when he is fooled into a trap set by his supposed best friend and is tragically murdered.

Most flawed moment– Getting distracted at a party and forgetting to get help for fellow wedding guest Cal, who is stuck in a snare trap. 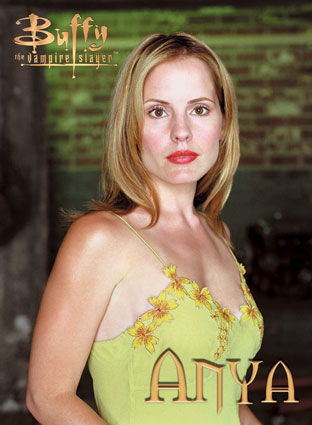 Anya always tended to say what she was thinking, even when it was downright inappropriate and insulting. She had no filter. Her brutal honesty and lack of tact often made those around her uncomfortable. However she couldn’t be entirely blamed, after all she was a vengeance demon turned against her will to human. Anya struggled to understand human actions or emotions. Her lack of social etiquette, however, was what made her character so loveable and I believe contributed to her being a fan favourite. As well as her completely irrational fear of bunnies, of course.

Most flawed moment-Asking inappropriate questions about what would be done with Buffy’s mother’s body after she died. 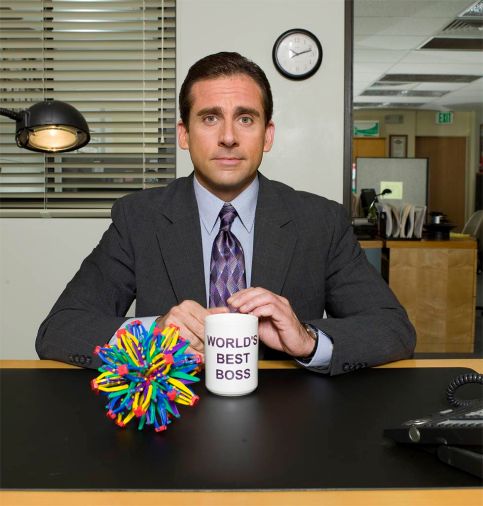 What can I say about Michael Scott? Terrible manager. No authority. Poor decision maker. Socially inappropriate and awkward. And yet fans around the world wept when the character departed after 7 seasons. As did his colleagues. Despite his incompetence he was loved. This was in some part due to the character’s heart of gold. He loved those around him (apart from Toby) and actively tried to make their lives better. In fact most of his inadequacies as a manager came from the fact that he was trying to inject fun into the workplace and make people happy. After he left we and his colleagues realised that maybe he was indeed the World’s Best Boss.

Most flawed moment–Trying to frame Toby for possession of marijuana 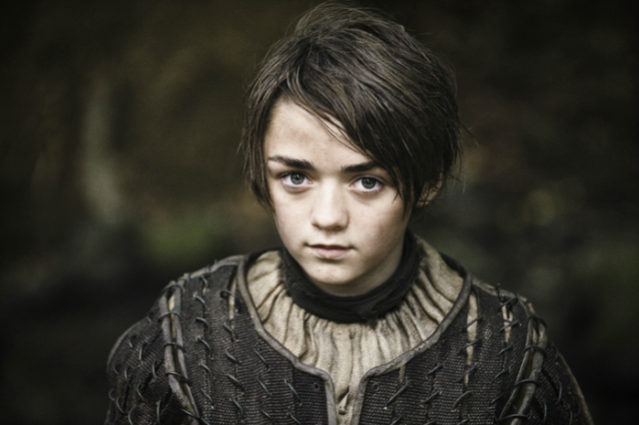 Some may be shocked by this choice. But if you think about it Arya Stark is truly flawed. And understandably so. Her comfortable lifestyle was taken from her and she has watched most of her family and friends die, all at a very early age. Arya has always been stubborn and fiery but these atrocities are what truly made her bitter and angry. She also gained a sense of ruthlessness and has murdered people without remorse or hesitation. However she is one of the most likeable people in GoT, perhaps in some part due to this fire and spirit. She is intelligent and resourceful, and proved herself a true survivor. All this and the fact that we know the difficulties that lead to her to commit such crimes let us forgive her many flaws.

Most flawed moment-Leaving The Hound to die in pain.

Much like Mindy Lahiri, Gaius Baltar is by definition selfish. Described by others in the series as “cowardly”, “arrogant”, “weak” and “narcissistic”, Gaius starts out the series as a womanizing opportunist who only looks out for himself. And yet he is probably the person the fans can identify with the most. He repeatedly makes poor decisions, and while he does learn from them and mature, he still has that human quality of making mistakes.  By the end of the series he has become much braver and more caring, offering to fight in the last battle even though he is terrified. The bad character qualities and flaws, coupled with his growing courageousness and loyalty make Gaius the true antihero of BSG.

Most flawed moment–Giving Number Six access to the defence mainframe in order to continue his relationship with her.

May could be described as somewhat of an ice maiden. Her cold exterior and harsh personality can sometimes make it hard for her fellow agents and us as an audience to understand her. A lot of the time she will speak her mind not considering others feelings and when she thinks her plan is the best course of action she is stubborn in her resolve. However if you peel back the layers you find a fiercely loyal warrior whose past has been scarred with tragedy. She will do whatever it takes to keep her loved ones safe, even if it causes controversy. Through all of this we adore her, because let’s face it who doesn’t love a badass?

Most flawed moment– Spying on Coulson for Nick Fury 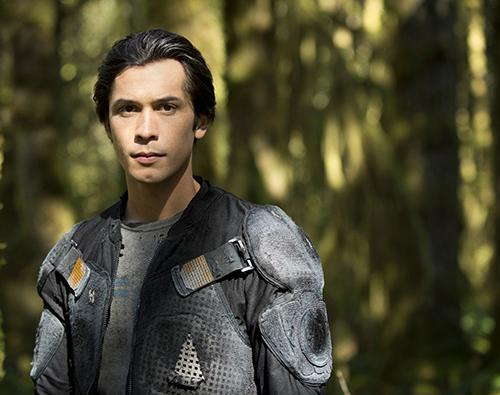 Now this may be a bit bias as Bellamy Blake is my favourite character in The 100. However his flaws are what makes him my favourite character. He is a character that constantly swings between light and dark. You can love him one minute, hate him the next. But underneath it all you’re constantly rooting for him. Bellamy can make very poor decisions; he is both rash and stubborn. He is a do first, think later kind of a guy which can lead to trouble. Also in war he is shown to favour violence and torture rather than peaceful negotiation. However what makes him redeeming is the reason behind what he does. Loyal and fiercely protective, Bellamy will do whatever it takes to keep those he loves safe. His violent actions often stem from trying to defend those close to him, especially his sister. An antagonist turned protagonist, Bellamy’s many faults make his character the standout of the show.

Most flawed moment– Shooting the Chancellor in order to get a place on the ship destined for Earth.