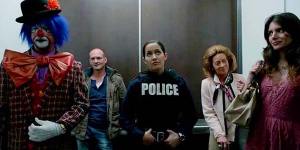 So a Lawyer, a rich woman, a cop, an escaped convict, a possible escort, a French actress, a clown and an Irish man survive an apocalyptic situation. I suppose right now you’re waiting for the punch line, this is not one of my overextended jokes, this is the plot to the new series The After. The After is being sold to us with this little blurb –

‘Eight strangers are thrown together by mysterious forces and must help each other survive in a violent world that defies explanation.’

I have to admit the pilot is pretty intense, something bad has happened and no one really knows what’s happening. Like early episodes of Lost you are drawn in by the mystery. The After reminds me of The Event (short lived series that never lived up to its full potential), Lost and maybe even a little End of Days. This series is starting small (small being riots and helicopters colliding into each other), but it’s hinting a much bigger force is playing at work in the background.

If you like mystery then this pilot is for you, it’s not going to be predictable, and at least so far it’s not. The violence is realistic and not over the top. It keeps you on the edge of your seat, combined with calm lulls, where nothing happens, but this just sets you up for even bigger thrills. Another fun fact for all you X-Files fans out there Chris Carter is the driving force behind this series, it really makes me wonder why a cable network didn’t pick this up. The pilot is that good. It’s a series that I hope will live up to its full potential one day.

Tagged as: Amazon, The After