Late to the Party – Battlefield V

The Bad Company games were two of my favourite First Person Shooters of the last generation. Since the release of those games (and Battlefield 1943, a game I devoted more time to than any other on Xbox 360) I’ve made it a habit of purchasing each Battlefield release, albeit mostly when they have experienced a serious discount. Battlefield 3, 4 and Hardline were all solid enough shooters, but, in my opinion, felt too “samey” with their generic, modern setting and cut n paste guns. This is why I took especially to Battlefield 1 and, more so V. 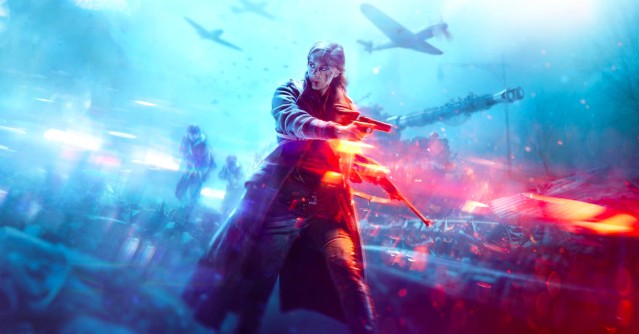 I picked up the game last week on Xbox, again at a significant discount. It is a game I’ve kept an eye on during its first six months of life, and while initially skeptical of the 64 player Firestorm mode, I found that this was the aspect of the game I am enjoying the most.

Usually, whenever I buy a shooter, I’ll play through the campaign mode first (except with Black Ops 4, because fuck single player, eh, Activision?). I like to get accustomed to the mechanics of a game before venturing online, where, more often than not, I’ll impolitely get my ass handed to me.

But this time, having played all of the recent Battlefield releases, and knowing that, as Ron Pearlman has a habit of repeating: War. War never changes, I opted for Multiplayer from the off, because the basics of playing a Battlefield game online rarely change. And that’s not a bad thing. Battlefield online operates around a core rule set of capturing and holding areas, or holding/advancing the line of defense or attack. I felt suitably well versed from my previous playtimes to jump straight into GRIND, a timed event where the combat was (the mode has since ended) focused along three lanes of engagement.

I had a blast! Literally! It was carnage! My Razer Headset never sounded so good!

Admittedly, it took me a while to understand the flow of progression due to a cluttered UI, but soon enough I was back among the ebb and flow of the Battlefield Multiplayer experience.

And it felt good.

It played good, too.

Battlefield has a knack of adding weight and punch to weapons that other developers seemingly cannot match. Add to that the destructive environment and…

Yet it is in Firestorm, the BR mode where I have found a new and enjoyable challenge, which was surprising because I really do not enjoy BR games.

In my experience, PUBG is too slow; I spend an age foraging for and swapping out guns that more or less does the same thing (i.e. miss), then get shot in the back as I cross a deserted street. Blackout is too fast; I land and I’m already in a firefight I’ve no hope of winning. Fortnite makes my head hurt with its needless building gimmick, and Apex, while promising at launch, is now dominated by players who live and breathe the game; basically, if you are anything like me, you won’t stand a chance of winning a round.

But Firestorm is different. I feel like a gaming journalist’s equivalent of Goldilocks here when I say it’s not too fast, not too slow, not too complex and not too simple. My preferred playstyle of land, gear up with whatever is to hand and slowwwwwwly  make my way across the map, using the environment as cover, seems to fit the mode perfectly. No longer do I immediately lose a firefight if I failed to get off the first shot. Indeed, the clever use of cover and intelligent movement are as important to victory as a keen eye and a steady click. I like that.

Exchanges feel weighty, and the variety of tactics at hand means you can approach fights differently each time.  For example, sometimes I’ll turtle and take pot-shots from distance to get the kill. Other times, I’ll stalk an opponent before either surprising him with an onslaught from range, or by suddenly rushing his position. I’ve played probably ten or so matches, earning a second place with 4 kills and numerous top 15 finishes. That kind of outcome just doesn’t happen for me in PUBG or Blackout.

So, I’m enjoying the game, and I’ve still to explore the single player campaign (which I hear good things about) and the rest of the multiplayer modes. This will be a game I return to time and time again, much as I did with the last release, Battlefield 1. (Although in my opinion, V is the more well-rounded of the two.)

I know there was a lot of heat on launch with regards to historical accuracy and the attitude of some of the development staff towards the community, but time has passed and tempers have cooled (if only temporarily – the recently added real money currency system has incited a backlash, and rightly so, but you can play the game and ignore all of that if you want to.) and the game feels like it is in a good place. Yes, it’ll likely be surpassed by whatever direction the next Battlefield game takes, and you can guarantee there will be iteration, but for now, the lobbies are full, the explosions plentiful, and it’s hard not to recommend Battlefield V as a viable shooter such is the range of experiences on offer.

Another week another great batch of releases from @dynamitecomics. My top pick is perfect for all you Gane of Thrones fans as it is the latest part of their Clash of Kings series.
Not really a beer drinker but this seemed appropriate for comic-con weekend
Anyone else been watching the SDCC at home panels?
My Tweets